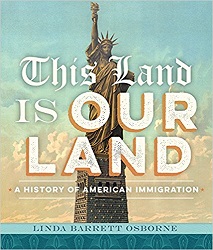 This Land Is Our Land

A History of American Immigration

I heard Linda Barrett Osborne speak at the awards ceremony for the YALSA Excellence in Nonfiction Awards. She commented that her book wasn’t as timely when she began writing it in 2013. The facts in the book go up to 2015, but I do hope that her publisher comes out with an updated version before long. Though we may need to see how the next few years go.

The history of immigration in America is fascinating. In her talk, the author surprised us with facts such as that Benjamin Franklin didn’t want too many Germans to immigrate, and immigrants from Asia were not allowed to become citizens until 1952.

This book covers more than 400 years of immigration in America – and it’s surprising how similar attitudes have been over the years. In the introduction, we read what George Washington wrote about discouraging immigration, and then the author says this:

Both of these ways of looking at immigration – openness to all or restrictions for some – are part of our heritage. In the early twenty-first century, we still debate who and how many people should be allowed into our country, and if and when they should be allowed to become citizens. Some Americans think of the United States as multicultural, made stronger by the diversity of different ethnic groups. Others think that there should be one American culture and that it is up to the immigrant to adapt to it. Still others have believed that some immigrant groups are incapable of adapting and should not be permitted to stay.

Americans whose families have lived here for some time – whether centuries, decades, or just a few years – often discount their own immigrant heritage. They look down on newcomers from other countries. Indeed, far from inviting Lazarus’s “huddled masses,” our laws, policies, and prejudices have often made it difficult for many immigrants to enter the United States or to find themselves welcome when they are here.

This Land Is Our Land explores this country’s attitudes about immigrants, starting from when we were a group of thirteen English colonies. Until the Chinese Exclusion Act of 1882, which kept Chinese workers from immigrating to the United States, there were no major national restrictions on immigration – therefore, there were no illegal immigrants, or what we now call “undocumented aliens”: people from foreign (alien) countries who have no official papers to enter the United States.

The author quotes from a letter by Benjamin Franklin about the many Germans settling in Pennsylvania in 1751. (Some of those were my ancestors!)

As they came, settled, and endured, each immigrant group went through a remarkably similar experience. They left their countries to escape poverty, war, starvation, or religious and political persecution – or for economic opportunity. As foreigners who came from different cultures and often spoke languages other than English, they faced prejudice from groups that were already here. They seemed to threaten American customs and values established as early as the 1600s. Often, they were denied jobs and housing. They did the hardest and least well paid work. Yet they saved money and made homes here. Immigrant men brought over their wives and children; immigrant children brought their siblings and parents. Families reunited. Whole communities left their country of birth and regrouped in America. The children and grandchildren of immigrants, born here, spoke English. They absorbed American attitudes and ways of living. They grew in numbers and gained political power.

They often acted toward immigrant groups that came after them with the same kind of prejudice and discrimination that their families had encountered when they first moved here.

This Land Is Our Land does not attempt to answer all the questions and solve all the problems associated with immigration. Rather, it looks at our history to provide a context for discussion. If we examine the way Americans have responded to immigrants over time – and the responses have been startlingly similar and consistent – we gain an insight into immigration issues today. Why do we sometimes invite immigration and sometimes fear it? How much does race play a part in whether we accept new immigrants? Does the legacy of our country’s origin as a group of English colonies still shape our attitudes?

This book also presents the experiences of immigrants who left their home countries to start a new life here. How did their expectations and aspirations match the realities of living in the United States? How was the experience of different groups affected by racial prejudice? How did they eventually succeed, if they did, in becoming Americans?

You can see that the author has big ambitions for this book – but I believe she succeeds.

Now, you may guess that she does have an agenda in presenting this background, and I think that agenda shows when she talks about how we all have immigrant ancestors – except for Native Americans. But her point is well taken. As she says in the Epilogue:

Do we treat them as fellow human beings, with respect and compassion – the way we wish our immigrant ancestors had been treated, no matter who they were, no matter which country they left to pursue the American Dream?

This book got an award from the Young Adult Library Services Association, and my library has it in the Juvenile Nonfiction section. The target audience seems to be upper elementary and middle school students, perhaps through high school. There are plenty of historical photographs included as well as copies of old documents. The large, wide pages make it seem a little younger – but there is enough information packed onto those pages, even with largish print, that older readers won’t feel talked down to – if they pick the book up.

It does seem like a good time to know about the history of immigration in America – this book is a good way to bring yourself up to speed. Our country’s attitudes haven’t changed a whole lot over the years – but it’s good to know that those immigrants we did welcome to our shores over the years are the very people who have helped to make our country great.

Find this review on Sonderbooks at: www.sonderbooks.com/Childrens_Nonfiction/this_land_is_our_land.html