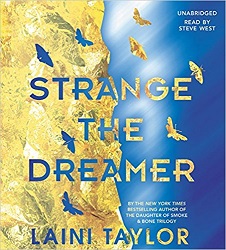 Note to self: Any time I start a new book by Laini Taylor, even if it doesn’t say “Book One” on the cover, check the last page for the words “TO BE CONTINUED.” This one has those words – and I would have been less dismayed if I had been prepared.

Laini Taylor’s imagination will never cease to amaze me. Every new world she builds is completely different from anything that’s ever been done before.

In this new world, we start with a boy named Laszlo Strange. He’s an orphan and is being brought up by monks. One of the monks tells him stories about a mythical long-lost city. Later, when he grows up, he becomes a librarian and finds more tales of this city.

And Laszlo knows that magic exists because of this city. For one day, suddenly, he forgets the city’s name, and all he can think of is “Weep.” Any writings about the city have the new name, Weep.

A lot more goes on. As a librarian, Laszlo helps the golden boy of the city, an alchemist, because he thinks there is a clue to the secret of alchemy within the writings about Weep.

Along the way, when talking about alchemy, we learn that everyone in this world has two hearts – one that pumps blood, and one that pumps spirit. (Where does Laini Taylor come up with these ideas?)

We also periodically visit an isolated family of five children with blue skin who live in a citadel and have special powers. A large part of the book is finding out how these two threads come together. The whole thing is stunning, and an incredible work of imagination. And okay, I really hate that these eighteen hours are only the beginning.

And yes, I said eighteen hours. Fortunately, I started this book on the way to South Carolina to see the total solar eclipse – and with traffic, it took me 13 hours to get home. I think it helped me get mesmerized by the story because I got to listen to most of it in one sitting (though I still had a lot left).

The book is long, and she repeats herself in a few places, but it was absolutely perfect for a long car drive. And Steve West may be my new favorite narrator. He distinguished between the voices of the various characters, and the voice he used for Strange the Dreamer was just plain dreamy. So I didn’t mind listening to his voice for a very long time. I hope he narrates however many books are still to come.

Find this review on Sonderbooks at: www.sonderbooks.com/Teens/strange_the_dreamer.html