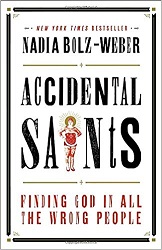 Finding God in All the Wrong People

I had checked this book out a few times in the past (as well as the author’s earlier book, Pastrix), but had never gotten around to reading it until a friend mentioned how good it is. Then I checked it out and got started right away – and gobbled it up quickly. I have no idea what took me so long to open it up, but better late than never.

Nadia Bolz-Weber tells stories in this book about ordinary, fallible people in her life who have made her see God’s grace, who have touched her life in miraculous ways.

Her book uses the structure of the church calendar, beginning with All Saints’ Day, where at her church, the House for All Sinners and Saints, they began a tradition of making “saint cookies” on All Saints’ Sunday.

Apart from those who have fallen in combat, Americans tend to forget our ancestors, and we spend as little time as possible publicly mourning them. But in the church, we do the very odd thing of proclaiming that the dead are still a part of us, a part of our lives, and are even an animating presence in the church. Saint Paul describes the saints as “a great cloud of witnesses,” so when they have passed, we still hold them up, hoping perhaps that their virtues – their ability to have faith in God in the face of an oppressive empire or a failing crop or the blight of cancer – might become our own virtue, our own strength.

But while she was thinking about saints who have gone before, her attention was called to a founder of a church there in Denver who did wonderful things but was also a racist. She was challenged to think of that woman as a saint. But I love this reflection:

Personally, I think knowing the difference between a racist and a saint is kind of important. But when Jesus again and again says things like the last shall be first, and the first shall be last, and the poor are blessed, and the rich are cursed, and that prostitutes make great dinner guests, it makes me wonder if our need for pure black-and-white categories is not true religion but maybe actually a sin. Knowing what category to place hemlock in might help us know whether it’s safe to drink, but knowing what category to place ourselves and others in does not help us know God in the way that the church so often has tried to convince us it does.

And anyway, it has been my experience that what makes us the saints of God is not our ability to be saintly but rather God’s ability to work through sinners. The title “saint” is always conferred, never earned. Or as the good Saint Paul puts it, “For it is God who is at work in you, enabling you both to will and to work for his good pleasure” (Philippians 2:13). I have come to realize that all the saints I’ve known have been accidental ones – people who inadvertently stumbled into redemption like they were looking for something else at the time, people who have just a wee bit of a drinking problem and manage to get sober and help others to do the same, people who are as kind as they are hostile.

This book tells about those kind of saints – deeply flawed, but people who God works through.

So that’s a description of this book, but it doesn’t completely convey the lovely warm grace the book extends.

And I say lovely – but I should mention that her stories are full of profanity. She doesn’t take a pious pose but presents real people and doesn’t try to cover up her own weaknesses and judgments and anger and need for grace.

Here’s another section I loved, coming after a story of a friend who had done something awful, reminding her of Peter and his denial of Christ:

The adjective so often coupled with mercy is the word tender, but God’s mercy is not tender; this mercy is a blunt instrument. Mercy doesn’t wrap a warm, limp blanket around offenders. God’s mercy is the kind that kills the thing that wronged it and resurrects something new in its place. In our guilt and remorse, we may wish for nothing but the ability to rewrite our own past, but what’s done cannot, will not, be undone.

But I am here to say that in the mercy of God it can be redeemed. I cling to the truth of God’s ability to redeem us more than perhaps any other. I have to. I need to. I want to. For whenwe say “Lord have mercy,” what else could we possibly mean than this truth? And to say “Lord have mercy, Christ have mercy, Lord have mercy” is to lay our hope in the redeeming work of the God of Easter as though our lives depended on it. Because they do. It means that we are an Easter people, a people who know that resurrection, especially in and among the least likely people and places, is the way that God redeems even the biggest messes we make – mine, Peter’s, Bruce’s.

And I loved this section, in a chapter about Judas and the Eucharist:

Amen! This book will uplift you, remind you of your own need for grace, and nudge you to go to a community and receive that grace through other people loved by Jesus.

Find this review on Sonderbooks at: www.sonderbooks.com/Nonfiction/accidental_saints.html