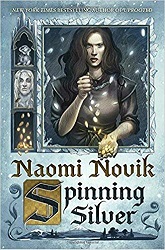 Ahhhh, such a lovely book! I love reworked fairy tales, and this one only had the beginnings of an idea from one, but spun an intricate tale with a mythic feel.

The real story isn’t half as pretty as the one you’ve heard. The real story is, the miller’s daughter with her long golden hair wants to catch a lord, a prince, a rich man’s son, so she goes to the moneylender and borrows for a ring and a necklace and decks herself out for the festival. And she’s beautiful enough, so the lord, the prince, the rich man’s son notices her, and dances with her, and tumbles her in a quiet hayloft when the dancing is over, and afterwards he goes home and marries the rich woman his family has picked out for him. Then the miller’s despoiled daughter tells everyone that the moneylender’s in league with the devil, and the village runs him out or maybe even stones him, so at least she gets to keep the jewels for a dowry, and the blacksmith marries her before that firstborn child comes along a little early.

Because that’s what the story’s really about: getting out of paying your debts. That’s not how they tell it, but I knew. My father was a moneylender, you see.

He wasn’t very good at it. If someone didn’t pay him back on time, he never so much as mentioned it to them. Only if our cupboards were really bare, or our shoes were falling off our feet, and my mother spoke quietly with him after I was in bed, then he’d go, unhappy, and knock on a few doors, and make it sound like an apology when he asked for some of what they owed. And if there was money in the house and someone asked to borrow, he hated to say no, even if we didn’t really have enough ourselves. So all his money, most of which had been my mother’s money, her dowry, stayed in other people’s houses. And everyone else liked it that way, even though they knew they ought to be ashamed of themselves, so they told the story often, even or especially when I could hear it.

But when things get desperate and her mother gets sick, the narrator, Meryam, decides to take on the duties of moneylender herself. She gets out her father’s ledgers and demands what is owed. And people pay her.

In fact, she’s so good at it, she gloats a little that she can turn silver into gold. And the king of the Staryk people hears her. Three times, he leaves her silver that she must turn into gold. If she doesn’t, she knows she’ll be destroyed. If she does – he’s going to marry her. And that is only the beginning of her troubles.

That is one of the three main threads in this book. Another involves the recipient of the jewelry she has made with the silver from the Staryk – jewelry that attracts a fire demon who is inhabiting the tsar, the tsar who needs a wife. The other thread involves a poor family who owes money to the moneylender. When he can’t pay it, Meryam takes the services of his daughter Wanda to pay off the debt. Wanda likes spending her days at the home of the moneylender more than staying at home.

All three young women are thought to be powerless in their world, and all three discover their power and their usefulness.

There’s plenty of magic in this story, with the Staryk prolonging winter, so crops fail and people die, and magical bridges between the Staryk world of ice and the sunlit world. And the plot twists and turns and what we mostly want is for these resourceful women to discover their power and be able to help the people they love.

Naomi Novik spins a magical and mesmerizing tale with threads within threads.

Find this review on Sonderbooks at: www.sonderbooks.com/Fiction/spinning_silver.html