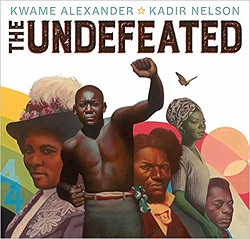 Kwame Alexander and Kadir Nelson pretty much form my dream team of picture book creators. Kadir Nelson creates lavish, lush paintings of people who are radiant with light. Kadir Nelson writes poetry that sings. In this book they use those powers together to celebrate black Americans through the ages.

Kwame Alexander wrote a poem beginning in 2008, the year his second daughter was born and the year Barack Obama was elected the first African American president of the United States. He explains in the back many reasons he wrote the poem, culminating in this one:

But mostly I wrote a poem to remind Samayah and her friends and her family and all of you, and to remind myself, to never, ever give up, because, as Maya Angelou wrote, “We may encounter many defeats, but we must not be defeated. It may even be necessary to encounter the defeat, so that we can know who we are. So that we can see, oh, that happened, and I rose. I did get knocked down flat in front of the whole world, and I rose.”

The poem references African American history, and the magnificent portraits that accompany the poem show people in action, some historical figures and some unnamed.

There are lines like this, accompanied by a portrait of Jesse Owens leaping:

This is for the unforgettable.
The swift and sweet ones
who hurdled history
and opened a world of possible.

There are lines like this, accompanied by a large portrait of Martin Luther King Jr.:

This is for the unlimited,
unstoppable ones.
The dreamers
and doers
who swim
across The Big Sea
of our imagination
and show us
the majestic shores
of the promised land:

There are lines like this, accompanied by a portrait of Jack Johnson, the first African American world heavyweight boxing champion:

This is for the unflappable.
The sophisticated ones
who box adversity
and tackle vision.

There are several pages with a whole group of people shown – and in the back you can check a list of historical figures with short bios to find out who they are.

And every portrait is of an African American person – but lifting the dignity of other humans raises us all. Celebrating triumph over obstacles elevates us all. So I believe this book is for me, too.

Find this review on Sonderbooks at: www.sonderbooks.com/Childrens_Nonfiction/undefeated.html