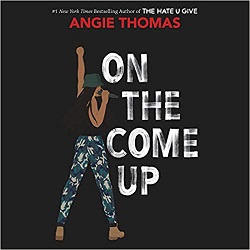 On the Come Up

Here’s a second book by Angie Thomas, set in the same city of Garden Heights as her award-winning debut novel, The Hate U Give. Sixteen-year-old Bri has noticed a greater police presence in Garden Heights since the shooting from the earlier book and the protests that followed. They’ve also found that the security guards at her private school target the black and brown kids.

But right now, all Bri is concerned about is getting her big break. She’s loved to rap since she was a little girl. Her father was a rapper before her, but he was shot in gang violence when she was small. Now Bri is going to compete in the Ring, and what happens there gets her some attention.

Meanwhile, Bri gets harassed and thrown to the ground by school security, who called her a hoodlum. That’s simmering in her brain when she gets a chance to record a song, “On the Come Up.”

The song is popular – but plenty of people take it the wrong way. And that gets Bri’s temper flaring. Which doesn’t make her mother happy. But what her mother doesn’t know won’t hurt her. She recently lost her job, and if Bri can make it big as a rapper, maybe she can keep the electricity on and change all their lives.

One thing I love about this book and listening to the audio is that you get to hear the rapping. It bothers me when authors write about characters doing well in a competition but don’t let you see or hear what they use to compete. (A recent book that did that was Poet X, by Elizabeth Acevedo. It’s a wonderful book – but what poems did Xiomara use in the poetry slam?) In this audiobook, you get to hear “On the Come Up,” and I promise it will start going through your head.

One word of warning is that there’s plenty of profanity in this audiobook, so you probably won’t want to make this family listening – young kids might pick up more than the songs.

But if you’re looking for a profound book about dreams of making it as an artist combined with social issues and dealing with poverty and family dynamics and friendship dynamics and the question of what constitutes selling out – this wonderfully entertaining audiobook does all of that.

Find this review on Sonderbooks at: www.sonderbooks.com/Teens/on_the_come_up.html