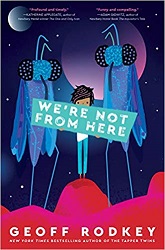 We’re Not From Here

Here’s a tremendously fun and creative science fiction book for kids, with plenty to seriously think about as well.

Set in the future, the book begins with Lan and his friends on Mars, talking about rumors that the colony has found a new planet where humans can live.

Humans made earth uninhabitable a year before, but many escaped to a colony on Mars. However, the air processors were wearing down, people’s clothing was ragged and stinky, and the only food they had to eat was something called Chow manufactured by the Nutrition department. So humans needed a new place to live.

They found a planet called Choom with an atmosphere that will support human life. What’s more, Choom had taken in alien refugees before. There were already four species of aliens on Choom, three of which originally came from different planets. The main species, the Zhuri, look like giant mosquitoes. After some negotiating, they get an invitation to come to Choom as refugees. They go into bio-suspension for twenty years to make the trip. But when they wake up, the government of Choom has changed, and humans are no longer welcome.

In orbit around Choom, the humans who are left do not have enough fuel to go anywhere else. If Choom doesn’t take them, they’ll die. But the Zhuri now believe that humans are too warlike. After much negotiating, since they did invite the humans to Choom, the Zhuri agree to take one human family. If they can live in peace, all the humans can come, but if there are any incidents, the whole human race will have nowhere to go.

Lan, his sister, and their parents are the family chosen to represent humans. Lan and his sister must navigate going to school on an alien planet and trying not to cause any trouble – without knowing how anything works.

And they soon realize they have been set up to fail. Movies about World War II (from earth transmissions) have been playing on Choom television, showing how violent humans are. The Zhuri swarm in protest. Do Lan and his family even have a chance of saving the human race?

That makes the story sound grim, but it’s full of humor – because natural misunderstandings have plenty of food for humor. In fact, humor may be the key to saving the day.

This one takes the new-kid-at-school story and makes it intergalactic.

Find this review on Sonderbooks at: www.sonderbooks.com/Childrens_Fiction/were_not_from_here.html