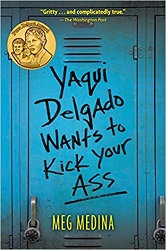 A wonderful thing happened at ALA Annual Conference – as the exhibits were closing, I was able to grab free copies of two of our Newbery winner’s backlist titles. Then, with it in my bag, I did some reading later while waiting in line, so this was the first book I read after the conference.

The story is told in the voice of Piddy (short for Piedad) Sanchez. It begins with a bang:

A kid named Vanesa tells me this in the morning before school. She springs out with no warning and blocks my way, her textbook held at her chest like a shield. She’s tall like me and caramel. I’ve seen her in the lunchroom, I think. Or maybe just in the halls. It’s hard to remember.

Then, just like that, Vanesa disappears into the swell of bodies all around.

Wait, I want to tell her as she’s swallowed up. Who is Yaqui Delgado? But instead, I stand there blinking as kids jostle for the doors. The bell has rung, and I’m not sure if it’s only the warning or if I’m late for first period. Not that it matters. I’ve been at this school for five weeks, and Mr. Fink hasn’t remembered to take attendance once. A girl near his desk just sort of scans the room and marks who’s out.

It turns out that Yaqui Delgado is a bully, and Piddy is in real trouble. It starts with small things that Piddy can’t pin on her, such as a chocolate milk thrown in her direction that explodes all over Piddy’s clothes. But Yaqui becomes hyperaware and starts living her life to avoid Yaqui Delgado. Her grades suffer. But she can’t tell her mother what’s really going on.

If only they could move back to their old neighborhood. But Aunt Lily teaching her to salsa dance may have been what got her into this mess. She’d been walking with a swing in her hips. That will certainly stop, as now she’s living in fear.

You might think this couldn’t fill a whole book, but it does, and does it well. If nothing else, I learned from this that bullying isn’t simple and doesn’t have simple solutions. And yet it can be overcome.

You’re with Piddy in her fears, frustrations, and gut-wrenching decisions. And ultimately, you’re with her as she figures out how to rise above the fear.

This is a lovely book that immersed me in a world I didn’t know. I was touched by the author’s note at the back:

Years ago, when I was in school, a girl in a rabbit-fur jacket cornered me in the school yard and announced that one of our school bullies was going to beat me up. What I remember most from that time was loneliness and all the risky choices I made as I embarked on the search for a tough-girl shell that could withstand any attack. But as I struggled against the dread of being in school, I became someone else entirely. I hid every talent and interest I had in the hope of appearing fierce and untouchable to the bully and the rest of the world. It was a struggle to find my identity and inner strength – as a student, as a young woman, as a Latina. I was in a fight for my dignity.

Meg Medina brings us into this fight for dignity in this beautiful book.

Find this review on Sonderbooks at: www.sonderbooks.com/Teens/yaqui_delgado.html