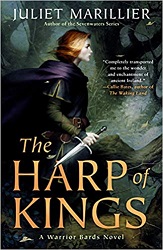 The Harp of Kings

As the book begins, Liobhan (There’s a character list with pronunciation guide at the front – she’s LEE-vahn.) and her brother Brocc are training on Swan Island to be warriors. (If the reader has read the Sevenwaters books, they will know about Swan Island – though I didn’t remember any particular characters who were there.) Only a few of the trainees get selected to stay on the island as elite warriors and spies – and Liobhan wants nothing more, as does Dau, who has become her rival.

But then Liobhan and Brocc get selected for a special mission. In a nearby kingdom an important ritual object has gone missing, the Harp of Kings. It is needed if the royal heir, who has just come of age, is to be crowned at midsummer. However, the regent doesn’t want anyone to know it’s missing, which could cause unrest. Liobhan and Brocc are skilled musicians, so they will go to the kingdom as traveling minstrels with a leader from Swan Island, and seek to recover the harp.

Readers of Juliet Marillier’s other novels will not be at all surprised when druids are consulted and the Folk of the Otherworld get involved. There’s a wise woman who lives on the hillside outside the town who is very like Mistress Blackthorn.

The plot is interesting and otherworldly, but what makes these books so wonderful is the way the author pulls you into this ancient world and you believe that magic can happen.

Here’s a short section from Brocc’s perspective after they’ve gone on their mission:

We play for the household on our first night at court. With time so short, Archu thinks it best that we make our presence known straightaway, and what better opportunity than this? Everyone is gathered, from Prince Rodan and the regent down to serving folk, grooms, and a group of children under less than strict supervision. We choose pieces that are tried and trusty, those most popular with our audiences back home. While we sing and play I try to observe, as we’ve been taught, but it’s hard; my mind loses itself in the music. At a certain point, someone in the crowd asks for dancing, and folk move the tables and benches back to make space. So we give them a couple of reels, and then “Artagnan’s Leap,” which allows Liobhan to show off her talents on the whistle. The children love the jig; they try to clap in time, even though it gets quicker and quicker, and they perform their own version of the dance to the accompaniment of much giggling. Except for one, who sits very still, apart from the others, watching us with such concentration that it’s a little unnerving. When I smile in her direction, she turns her gaze away as if caught out in a misdemeanor.

This book does stand alone and come to a satisfying finish – but I still hope that more books will come soon. I want to read more about these people and this world.

Find this review on Sonderbooks at: www.sonderbooks.com/Fiction/harp_of_kings.html