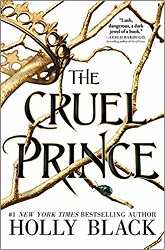 Wow. Before reading this book, I’d read two children’s books with very clunky writing. Then I picked up The Cruel Prince at the library – the first published 2018 book I’ve read (instead of an advance reader copy) – and I was entranced, enthralled and pulled into the world.

I’m writing this review in 2018, before I’ve talked with anyone else about the book – so these opinions are entirely my own. I’m also not sure how much Newbery consideration I should give to a book so clearly written for young adults. The Newbery criteria say we’re looking at excellence in presentation for a child audience, and I’d say this book isn’t written for a child audience. But on the other hand, it then defines a “child” as someone between the ages of 0 and 14, and there are certainly 14-year-olds who will enjoy this book. Anyway, that’s something I’m going to ask about when our committee meets in February. Once I’ve gotten some more advice, I won’t discuss it in reviews.

Newbery consideration aside, one of the things that makes this book so wonderful to read is how completely Holly Black immerses the reader into the world of faerie. It’s a dark, dangerous, and scary world, but we feel like we understand what it’s like for Jude to live there.

The book opens with a Prologue – in which seven-year-old Jude sees both her parents killed by a tall man who comes to their door.

The man, Madoc, is a faerie. He tells her big sister Vivienne that he is her father. She was stolen from him, and he has come to take her to her true home, in Elfhame beneath the hill. He takes Jude and her twin sister Taryn as well. They are the children of his wife, so he takes responsibility for them. They are brought up in luxury – in Faerie.

The servants are overfond of telling me how fortunate I am, a bastard daughter of a faithless wife, a human without a drop of faerie blood, to be treated like a trueborn child of Faerie. They tell Taryn much the same thing.

I know it’s an honor to be raised alongside the Gentry’s own children. A terrifying honor, of which I will never be worthy.

It would be hard to forget it, with all the reminders I am given.

Faeries can’t lie, so they tend to concentrate on words and ignore tone, especially if they haven’t lived among humans. Tatterfell gives me an approving nod, her eyes like two wet beads of jet, neither pupil nor iris visible. “Perhaps someone will ask for your hand and you’ll be made a permanent member of the High Court.”

Jude wants to compete in the upcoming tournament and be chosen to be a knight. But the rivals in the tournament, faeries her own age, despise her for being mortal. And Madoc has other plans, forbidding her to become a knight.

But then she gets an offer to be a spy for one of the princes of Elfhame.

The High King has chosen to retire soon, and he has chosen Prince Dain to be his successor. But there are intrigues and plots unfolding around the succession, and Jude gets caught in the middle of it.

That’s the beginning – and my summary doesn’t do the intricacies of the plot justice.

This is the story of a teen girl coming of age and trying to make her way in a world where she is utterly foreign, seen as a different species. There’s lots of danger and lots of on-stage death – but the look at the world of faerie – which Jude is accustomed to – is fascinating and exotic and intriguing. As the story develops, Jude must not only find a place and gain some power, but she also needs to stay alive.

This is the first of a series, and the book ends at a frustrating point – but at a place where readers will be eager to read on as soon as they get the chance.

The romance seems clichéd. I’m sure she’s going to end up with the person she hates most at the start of the book – for no good reason except that they hate each other at the start. But the author succeeds in making him very interesting by the end of the book – so I can at least understand that Jude would be interested as well.

This book has an elaborately portrayed world. It has an intricate plot, with twists and surprises and dangers. The characters are complex. The theme of coming of age – even if you have to kill and lie to gain power – is the part that doesn’t seem suitable for a child audience. But teens are going to love it.

Find this review on Sonderbooks at: www.sonderbooks.com/Teens/cruel_prince.html