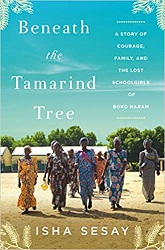 Beneath the Tamarind Tree

A Story of Courage, Family, and the Lost Schoolgirls of Boko Haram

CNN journalist Isha Sesay tells the story of 276 Nigerian girls kidnapped from a boarding school in the night of April 14, 2014. 57 managed to escape that night. The girls were made to sleep on the ground, work for their captors, and given little to eat. They were urged to convert to Islam and then to marry their captors. The ones who refused to convert were made to work as slaves for the new wives.

I was a little ambivalent about how much Isha Sesay puts herself into the story. But it seems appropriate because part of the story is how little the Nigerian government did to recover the girls, who were from poor, rural families. There was even a strong movement asserting that it was all a hoax to make the government look bad. So the author’s work to bring international attention to the plight of the girls did help their recovery.

More than 100 of the girls have still not been recovered. But twenty-one were released on October 13, 2016, and eighty-two more in May 2017. The author worked with the released girls to find out their story, but she also gives the perspective of heartbroken parents who still have not recovered their daughters.

Even though the author is herself Muslim, the Christian faith of the schoolgirls shines through in these pages. It was their faith – especially of those who refused to convert – that helped them through the terrible times.

Boko Haram is against educating women, so it’s something of a triumph that most of the released girls are now attending university. But I do hope this book will help the world remember the plight of those who have still not been recovered.

This story is both inspiring and very sad. It’s terrible what the girls and their parents went through, and what many are still enduring. But those who came home tell an inspiring story of faith and perseverance during a frightening trial.

Find this review on Sonderbooks at: www.sonderbooks.com/Nonfiction/beneath_the_tamarind_tree.html