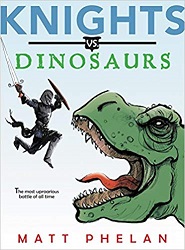 This one is silly fun with speculation: What would happen if knights had to fight dinosaurs?

Erec is a knight in King Arthur’s court, and he’s been bragging. The truth is, he’s never seen even one dragon. But all the knights start bragging when they get together, and he got carried away and claimed he’d defeated 40 dragons.

That gave Merlin an idea. He suggested that Erec go defeat a “Terrible Lizard” in a cave the next morning – Merlin would give him a map.

It’s probably just as well that some other knights didn’t want Erec to get all the glory. Because it turned out that Merlin put a time-traveling spell on the cave – and sent them all back to the time of the dinosaurs.

(Okay, the truth is that not all the dinosaurs that appear in this book lived at the same time. But that’s admitted at the back of the book and kind of beside the point. We’ve got knights fighting dinosaurs and living to tell the tale.)

There’s a nice twist that it turns out the strongest knight of them all is female. It’s a lot of good-hearted fun, including battles with dinosaurs.

This is an early chapter book and includes plenty of Matt Phelan’s illustrations. Some of the battles are told with panels, in fact.

Knights fighting dinosaurs and realizing they’re going to have to work together. What could be more fun?

Find this review on Sonderbooks at: www.sonderbooks.com/Childrens_Fiction/knights_vs_dinosaurs.html