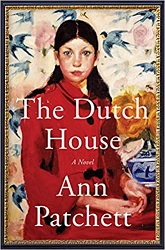 I received an Advance Reader Copy of this book at the Public Library Association Member Welcome Breakfast at which I received the 2019 Allie Beth Martin Award. Ann Patchett spoke at the breakfast, and she did talk about the book. She said it was the book about one of her deepest fears – becoming a horrible stepmother. After her talk, she signed the advance reader copy to me, including “Congratulations!”

It took me almost a year to actually get around to reading the book. Not because I didn’t want to! Ann Patchett’s writing is amazing! Mainly it was because I owned a copy, so it wasn’t a library book and didn’t have a due date. I was trying to read all of L. M. Montgomery’s books last year, too.

But when I did read it – as always I was amazed by Ann Patchett’s writing ability. Yes, there is a terrible stepmother in this book. A lot of the book focuses on the Dutch House – a mansion on the outskirts of Philadelphia where the narrator and his sister grew up. Their father had bought it, with all its contents, after the VanHoebeeks had all died and it was sold off.

The VanHoebeeks weren’t the story, but in a sense the house was the story, and it was their house. They had made their fortune in the wholesale distribution of cigarettes, a lucky business Mr. VanHoebeek had entered into just before the start of the First World War. Cigarettes were given to soldiers in the field for purposes of morale, and the habit followed them home to celebrate a decade of prosperity. The VanHoebeeks, richer by the hour, commissioned a house to be built on what was then farmland outside of Philadelphia.

The stunning success of the house could be attributed to the architect, though by the time I thought to go looking I could find no other extant examples of his work. It could be that one or both of those dour VanHoebeeks had been some sort of aesthetic visionary, or that the property inspired a marvel beyond what any of them had imagined, or that America after the First World War was teeming with craftsmen who worked to standards long since abandoned. Whatever the explanation, the house they wound up with – the house we later wound up with – was a singular confluence of talent and luck. I can’t explain how a house that was three stories high could seem like just the right amount of space, but it did. Or maybe it would be better to say that it was too much of a house for anyone, an immense and ridiculous waste, but that we never wanted it to be different. The Dutch House, as it came to be known in Elkins Park and Jenkintown and Glenside and all the way to Philadelphia, referred not to the house’s architecture but to its inhabitants. The Dutch House was the place where those Dutch people with the unpronounceable name lived. Seen from certain vantage points of distance, it appeared to float several inches above the hill it sat on. The panes of glass that surrounded the glass front doors were as big as storefront windows and held in place by wrought-iron vines. The windows both took in the sun and reflected it back across the wide lawn. Maybe it was neoclassical, though with a simplicity in the lines that came closer to Mediterranean or French, and while it was not Dutch, the blue delft mantels in the drawing room, library, and master bedroom were said to have been pried out of a castle in Utrecht and sold to the VanHoebeeks to pay a prince’s gambling debts. The house, complete with mantels, had been finished in 1922.

This is a story about a family, and a story about complicated relationships. This is no typical family at all, but somehow the emotions and relationships ring true. The people seem all the more real because, not in spite of, the fact that people with this particular life story surely never existed.

This is a book for people who like character-driven novels. There’s not a lot of dramatic action, and the story covers decades – but we get to know who these people are. There’s a mother who left her family to serve the poor, a father absorbed with work, a stepmother obsessed with getting the house, a little brother who does what he’s told, a big sister who misses her mother and hates her stepmother, and a dutiful wife who doesn’t realize what she’s getting into. Through all of it, the Dutch House represents all that Danny and Maeve lost.

In her talk, Ann Patchett said that when she told Kate DiCamillo what the book was about, Kate gave her the ending. I highly approve, for I especially loved the ending.

I finished the book happy for the time I’d spent with these people.

Find this review on Sonderbooks at: www.sonderbooks.com/Fiction/dutch_house.html