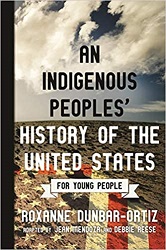 An Indigenous Peoples’ History of the United States

by Roxanne Dunbar-Ortiz
adapted by Jean Mendoza and Debbie Reese

I read this book because of the Honor it won at this year’s awards, and wow, it was an uncomfortable but eye-opening read. I’ve sometimes read adaptor Debbie Reese’s observations on her American Indians in Children’s Literature blog, and I’ve sometimes thought she was overreacting. But reading an entire book of United States history from the perspective of Native Americans – I hope that it helped me realize how biased my perspective was. It no longer seems like anything she has to say is overreacting.

It was an uncomfortable read. I like the version of history better that talks about the nobility of my “pioneer” ancestors, rather than about squatters who settled on land that didn’t belong to them.

Maybe I didn’t exactly like stories I’ve heard of Indians scalping innocent settlers, but I sure didn’t like to hear that the U. S. government paid hunters for every Indian they killed, and an easy way to prove their kills was to collect scalps. I sure didn’t like hearing that it was common to make souvenirs out of body parts of Native Americans slaughtered.

I recently read a book about the migration of wildebeests in Africa, the greatest land migration of animals on earth – now that the American buffalo herds have been decimated. In this book, I read about the systematic hunting of buffalo in an effort to also wipe out the Indigenous peoples who managed the herds and depended on them for their livelihood. A picture of a man on top of a mountain of buffalo skulls graphically illustrated this loss.

And the whole assumption that Indian lands were a wilderness not being used, available for anyone who wanted them, that assumption was shaken. When reading this book, I learned there was already a network of roads before the Europeans showed up, as well as sophisticated agricultural techniques, land management, and government.

When Europeans arrived on the continent, they often seemed unaware that many conditions that were useful to them were the result of Indigenous peoples’ stewardship of the land. Some early settlers remarked that in many places they could easily have driven carriages between the trees. Others commented about large clearings in the forests, some with well-tended gardens and cornfields. They did not seem to recognize that for thousands of years Native people had been making roads and clearing spaces to make trading, hunting, and agriculture easier. Willfully or not, they depicted the land as empty, devoid of “civilized” peoples – and theirs for the taking.

In the Introduction, we learn about the Doctrine of Discovery that influenced the first Europeans to come to this continent – and continued to influence the government of the United States.

In the late fifteenth century, as European explorers sailed to unfamiliar places, their actions and beliefs were guided by the Doctrine of Discovery – the idea that European nations could claim the foreign lands they “discovered.” The Doctrine of Discovery was laid out in a series of communications from the pope, leader of the Catholic Church, who was extremely influential in European politics at the time. It asserted that indigenous inhabitants lost their natural right to that land as soon as Europeans arrived and claimed it. People whose homelands were “discovered” were considered subjects of the Europeans and were expected to do what the “discoverers” wished. If they resisted, they were to be conquered by European military action. This enabled Columbus to claim the Taino people’s Caribbean home for Spain and to kidnap and enslave the Indigenous peoples. Similarly, the Pilgrims and the Puritans, the first groups from England to settle in what became the United States, believed they had a covenant with God to take the land. The Doctrine of Discovery influenced the policies of the young United States and directly affected the lives and the very existence of Native people. However, history textbooks for young people rarely invite students to question or think critically about that part of the US origin story.

“Free” land, with all its resources, was a magnet that attracted European settlers to the Americas. The word settler is used so frequently that most people do not recognize that it means more than just a person who settles down to live in a new place. Throughout history it has also meant a person who goes to live where, supposedly, no one has lived before. More often than not, “settlers” have gone to live somewhere that is already home to someone else. They are important to a nation – like Britain or Spain – when it plans to set up colonies in an area. Colonization is the process of taking political and economic control of a region, and colonizers are the people or institutions that are part of that process: the military, business interests, people who go there to live, and sometimes representatives of religious institutions. Because of their key role in establishing and populating a colony, settlers may be called colonizers. Settlers who came to what is currently known as North America wanted land for homes, farms, and businesses that they could not have in their home countries. Settlers who used the labor of enslaved Africans wanted limitless land for growing cash crops. Under their nations’ flags, those Europeans fought Native people for control of that land.

The Introduction also explains the meaning of such terms as genocide and white supremacy. Throughout the book, we see where the official policy toward the Indigenous people of America was indeed genocide. We see again and again treaties made with Indians that are officially the law of the land (designated so in the United States Constitution), but then are changed without ever consulting Native Americans.

I’m not sure I’m convincing anyone to read this book. It’s certainly not comfortable reading. But it is eye-opening and got me listening to a perspective that I don’t think I’d ever fully considered before. I’m not proud that this is new information, but I’m glad I finally tackled that new information. I’m putting the adult version of the book on hold, and I’m glad that a young people’s edition exists, as maybe this will encourage teens to consider these things at a much earlier point in their lives than I have.

Find this review on Sonderbooks at: www.sonderbooks.com/Childrens_Nonfiction/indigenous_peoples_history.html