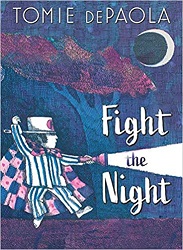 This book is a reprint of a Tomie dePaola classic I hadn’t been familiar with, but reading it, I’m quite taken with it.

The story is simple. A little boy doesn’t want to go to bed. What’s interesting is that he decides to Fight the Night.

He fights the Night with his flashlight. First, he encounters some different things, such as his cat.

After those things, though, in the dark, the Night whispers to him. It’s deliciously spooky.

“Let’s fight,” said Ronald, and he began to swing his flashlight around.
“You will never catch me,” said the Night.

Ronald heard a squeaking noise.
“I’ll get you, Night,” said Ronald, and he swung his flashlight.
“You missed,” said the Night.

Ronald ran after the voice. Something tripped him. He swung his flashlight.
“That’s not me. You cannot catch me. I am the Night.”

The battle goes on. Ronald thinks he has won. He has chased the night away! But oh, how tired his eyes look in that picture!

And indeed the Night gets the last laugh, in a perfectly satisfying ending.

Normally I wouldn’t think a book where a kid actually stays up all night would be one I’d want to let children see. But I think they will see who ultimately wins. Perhaps this will succeed as a cautionary tale that it’s futile to fight the Night.

Either way, reading this as a parent, I was smiling all the way through. Nice try, kid!

Find this review on Sonderbooks at: www.sonderbooks.com/Picture_Books/fight_the_night.html