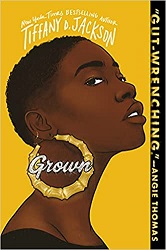 There’s a Content Warning at the front of this book for “mentions of sexual abuse, rape, assault, child abuse, kidnapping, and addiction to opioids.” The book begins with the main character, Chanty (short for “Enchanted”) waking up covered with blood and surrounded by blood. I expected a gritty novel about living on the streets.

But then chapter two flashes back and shows us a seventeen-year-old girl attending private school and on the swim team, who’s got a clearly loving and involved family. She’s got a wonderful singing voice, and as the book opens, she goes to an audition for BET’s version of American Idol. She doesn’t win the audition, but she gets the attention of Korey Fields, a 28-year-old rock star. He gives Chanty and her family VIP tickets to his upcoming show.

At the show, Korey gets her phone number, but asks her not to tell anyone. They begin a secret texting exchange.

At this point, I was happy that the book started with blood. That was a distinct signal that this relationship isn’t a good thing, and it’s not going to end well. And it doesn’t. In the name of boosting Chanty’s singing career, Korey convinces her parents to let him give her private lessons and even go on the road with him. To Enchanted, he’s getting her more and more involved in a relationship with him. A relationship that’s more and more controlling.

Since the story is told from Chanty’s perspective as it happens, we see easily how she’s sucked in. How flattered she was to get attention from a big star. How she tells herself he’s not all that much older and it’s meant to be. By the time things start going wrong, she’s already hooked and only wants to please him.

So you know it’s going to end poorly, but the effect is desperately wanting to warn her as Chanty gets more and more sucked in. And then there’s the blood – we don’t end up knowing who is actually responsible for that.

There’s a list of Resources in the Author’s Note at the end. We end up with a thriller that is based on actual cases and may open eyes to what domestic abuse can look like.

Find this review on Sonderbooks at: www.sonderbooks.com/Teens/grown.html