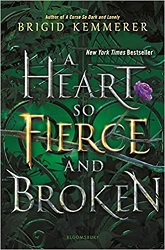 A Heart So Fierce and Broken

A Heart So Fierce and Broken is the second book in the series begun with A Curse So Dark and Lonely. And no, the series is not finished yet. The first book finished with a dramatic breaking of expectations with big implications for what would happen next – and so does this book. Both books seem to resolve most conflict brought up in the book – and then our tidy sense of completion is totally disrupted.

The first book is a retelling of “Beauty and the Beast.” Harper is brought from DC in an attempt to break the curse. Meanwhile, the kingdom isn’t getting much governing, but she helps the prince get through that crisis and an attack from a neighboring kingdom. At the end of the book, though, without giving details, we learn there’s a secret older brother who should be the rightful heir to the throne. And he is the child of a magesmith and has magic in his blood.

This book is about that heir, who doesn’t want to claim the throne but also doesn’t want to be killed. We also follow the fate of a princess of the neighboring kingdom who was not chosen to be her kingdom’s heir but wants to see if she can bring peace.

I like the way the author puts realistic political problems (needing a harbor for trade) into the fantasy kingdom. There’s some horrific cruelty in both books which I didn’t like, though it does make the people working for peace shine more brightly.

I enjoyed this second volume greatly. It now doesn’t have much to do with the “Beauty and the Beast” story, but is an excellent tale of a group of travelers trying to navigate dangers on every side and figure out what course of action is best.

Yes, I’m going to want to read the next book. Amazon says it’s called A Vow So Bold and Deadly and will come out on January 26, 2021. And yes, Amazon says it’s the conclusion to the series. It’s been set up well.

Find this review on Sonderbooks at: www.sonderbooks.com/Teens/heart_so_fierce_and_broken.html