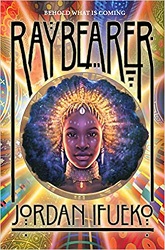 Raybearer is a complex fantasy story set in a richly-imagined world amazing in its detail.

Our main character, Tarisai, was brought up by servants and tutors in an isolated house in the desert, always longing for her mother, known simply as “The Lady,” who spent most of her days traveling. Tarisai learns that she is also the child of a desert spirit that the Lady bound to grant three wishes – and Tarisai has the burden of fulfilling the third wish. Tarisai is shown a face and told that after she loves him and is anointed by him, she must kill him. That is the wish she is bound to fulfill.

Tarisai only learns later that the face belongs to the prince, the Raybearer heir. The emperor of their land bears a ray that binds to him eleven council members. The bond between them, through the ray, is intensely close. They can speak to each other silently through the ray and they get Council Sickness if they are ever apart from all council members. Tarisai becomes a candidate for the prince’s council, but she resists becoming a council member, because she doesn’t want to kill him.

Tarisai has a gift, a hallow, where she can touch a person or thing and take memories from them. Maybe if she takes her own memories, she can thwart the curse.

That’s only the beginning, though. My only caveat with this book and the amazing world-building is that the plot is a bit too convoluted. We’ve got some major injustices to be righted, trying to thwart the curse, secrets about the ruling family, unjust new decrees, and much more. And it doesn’t come to a tidy solution – there will have to be further books because of what we know is coming.

The plot is maybe a little convoluted, but the characters are amazingly drawn. There are a lot of parents who are not great parents, but it is rarely so simple as plain good or bad. The Lady especially is a very complex character who loved Tarisai – but was afraid to show that love. She made some decisions in the past that seem bad, but Tarisai learns why she made those decisions.

I love that this world is so unlike any other I’ve ever read about in a fantasy novel. And the author smoothly gives us the information without information dumps. We learn how things are done and the beautiful and intricate setting, including magical travel and griots who tell stories and many more wonderful details.

This book is an amazing achievement, especially given that this is Jordan Ifueko’s debut novel. Yes, I will be looking for the next installment.

Find this review on Sonderbooks at: www.sonderbooks.com/Teens/raybearer.html