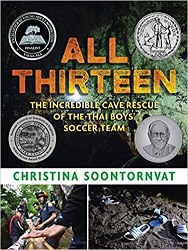 The Incredible Cave Rescue of the Thai Boys’ Soccer Team

Wow! I had checked this book out but had decided not to read it, because it’s long, and I thought learning about an incident faraway on the other side of the world wasn’t all that compelling. I’m so glad that watching it win Honor after Honor at the Youth Media Awards – including Newbery Honor, which is rare for nonfiction – convinced me that I was mistaken and should take another look. And author Christina Soontornvat won an incredible two Newbery Honors in the same year, also getting one for her novel A Wish in the Dark.

I was so glad I did. Christina Soontornvat tells the complete story of the thirteen boys on the Thai soccer team who got trapped in a cave and had the whole nation, even the world, rally round to save them. Having read the book, I now understand how they got trapped – the treacherous geology that brought rainwater suddenly and unexpectedly into the cave. I also understand what an incredibly difficult task it was to rescue them – the people in charge honestly thought five to eight of the boys would die.

What I remembered about the news event was that one rescuer – a Thai Navy SEAL – did die in the rescue process. I now understand why cave diving is so much more treacherous than open sea diving and how that could have happened, even to an expert diver.

The author was visiting family in Thailand when the boys got trapped, so she was able to express and understand what the people there were thinking and feeling about the rescue, and how hundreds of people pitched in to help without pay.

It was an international team that saved the boys, including American Navy SEALS and British cave divers. But the author tells about the many Thai people that were involved, including those who worked to divert streams flowing into the cave and drain water coming out of the cave, which was also crucial to making the rescue possible.

Believe it or not, I was so taken up with this story, I dreamed about it one night when I was in the middle of the book!

This book is long, with lots of text, but the text is broken up with photographs or charts or sidebars on almost every spread. This is more for middle school or high school readers than younger kids, but whoever picks it up, once you start reading, you’re going to be drawn in.

Find this review on Sonderbooks at: www.sonderbooks.com/Childrens_Nonfiction/all_thirteen.html