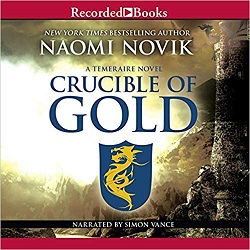 This is the seventh book in the Chronicles of the dragon Temeraire and his human, Captain Laurence of His Majesty’s Air Corps. By now, Naomi Novik has stopped trying to explain the world and drops you right in. She doesn’t make much effort to explain what went before – and this series is better read in order, to follow the developments. As for me, it had been a long time since I listened to Book Six, but there were enough reminders that I could follow what was going on and enjoy the familiar characters, dragon and human. (Simon Vance is good at being consistent, giving each character a distinctive voice.)

This book opens with Temeraire and Laurence in Australia, but they are given an offer to be reinstated to the Air Corps in order to help with a situation in Brazil. However, their voyage is met with disaster, and it takes the whole book before they get to Brazil.

Beginning with a sinking ship and continuing when they are picked up by a French vessel, they face one problem after another. I did enjoy that old friends and enemies show up at different times in the book.

Something I like about this series is how Temeraire and Laurence end up visiting all the continents and we learn how the dragons of that continent developed in this alternate world. All while Temeraire and his companion dragons are commenting and interacting. In this book they meet the Incans and their dragons and want to make an alliance before Napoleon can do so, no matter what it may take. I do like the back story of these dragons, who slaughtered Pizarro after he dared to kill a dragon’s human. Unfortunately, though, the human population has been decimated by plague, so dragons there are always looking for more humans. Add to that the dragons from Africa trying to recover the people stolen into slavery, and you’ve got a world that is diverging further and further from what happened in our world’s history.

Another novel of Temeraire! If you haven’t yet begun this saga, start with His Majesty’s Dragon, and you’re in for many hours of entertainment. It looks like I still have three more books to read before I’m done.

Find this review on Sonderbooks at: www.sonderbooks.com/Fiction/crucible_of_gold.html