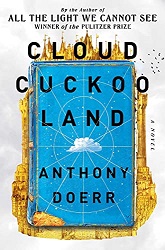 If you enjoyed Anthony Doerr’s All the Light We Cannot See, I think that Cloud Cuckoo Land is even better.

The title comes from Aristophanes’ play, The Birds, talking about a utopian city for birds located in the clouds. This book is threaded through with a story, supposedly written by Antonius Diogenes and only recently recovered in a damaged copy, about a shepherd named Aethon who wishes to become a bird so he can travel to this mythical city. Along the way, he has unpleasant adventures, including being transformed into an ass, before he can reach his goal.

Small fragments of Diogenes’ story are threaded through the book, along with stories from five other times. One of those times is February 20, 2020 at the Lakeport Public Library. (I wonder if originally the date was during the pandemic when libraries were closed. This was sidestepped by making it just before that date.) Another time is inside and outside Constantinople in the 1400s. Another time is the future, on the ship Argos traveling to an exoplanet from earth. And then we get backgrounds of two characters who we’ve seen in the library. One of their stories begins in 1941, and another begins in 2002.

All these characters and times end up having a relationship with the story of Aethon, as well as parallels with his story. The weaving together of the stories is beautiful.

I’m now more accustomed to reading children’s books, so starting such a long book was daunting. But once I got off to a good start, the result was rewarding. I’d like to read it again, because even glancing at the Prologue, I see some details I’d missed the first time around.

It’s hard to even describe this book. Is it historical? Is it contemporary? Is it science fiction? What we do have is an epic tale about the power of story and the importance of dreamers. Read this book! You’ll be glad you did.

Here’s how the main part of the book opens:

He escorts five fifth graders from the elementary school to the public library through curtains of falling snow. He is an octogenarian in a canvas coat; his boots are fastened with Velcro; cartoon penguins skate across his necktie. All day, joy has steadily inflated inside his chest, and now, this afternoon, at 4:30 p.m. on a Thursday in February, watching the children run ahead down the sidewalk – Alex Hess wearing his papier-mâché donkey head, Rachel Wilson carrying a plastic torch, Natalie Hernandez lugging a portable speaker – the feeling threatens to capsize him.

And the first fragment of Aethon’s story, Antonius Diogenes relating the discovery to his niece, goes like this:

. . . how long had those tablets moldered inside that chest, waiting for eyes to read them? While I’m sure you will doubt the truth of the outlandish events they relate, dear niece, in my transcription, I do not leave out a word. Maybe in the old days men did walk the earth as beasts, and a city of birds floated in the heavens between the realms of men and gods. Or maybe, like all lunatics, the shepherd made his own truth, and so for him, true it was. But let us turn to his story now, and decide his sanity for ourselves.

The caption on the story of Aethon is a fitting introduction to the book:

Stranger, whoever you are, open this to learn what will amaze you.

Find this review on Sonderbooks at: www.sonderbooks.com/Fiction/cloud_cuckoo_land.html