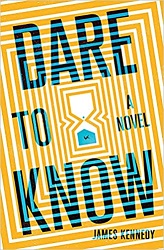 If you like exceedingly clever and also bizarre books – think Douglas Adams as an example – then you should try James Kennedy’s novels.

His first book, written for young adults, The Order of Odd-fish, inspired my entire Sonderling Sunday blog series, because if ever there was a book with interesting language, that was it.

In this new book, written for adults, our story opens with a washed-up but once prosperous salesman desperate to make a sale, trying to close that sale in a Starbucks. His product is unusual: Dare to Know tells people the day and time of their death.

Our narrator, whose name we never learn, was in at the beginning of Dare to Know and had studied thanatons in college – a newly discovered particle intimately wrapped up in human death.

At that time, the company was called Sapere Aude – the Latin translation of “Dare to Know” and (as I just discovered via Google) a famous quotation from Kant. Our narrator was a physics and philosophy major – as was the author, according to his bio. There’s lots of philosophy in this book, with a glaze of plausible physics theory of thanatons and a new field of “subjective mathematics” which is required to work with this theory.

The math and physics in this book doesn’t actually make any sense, but we’re told the information with such confidence and plausibility that even my strong implausibility detector didn’t pull me out of the story. But as I said, you should enjoy bizarre stories to best appreciate this book.

At the end of his bad day that opens this book, our narrator calculates his own death time and learns that it happened twenty-three minutes in the past. And yet he seems to be alive. But if the calculations were incorrect, this is the very first time Dare to Know has been wrong. Their accuracy is 100%.

This begins our hero’s journey to figure out if he’s dead or not. He goes on a quest to visit Julia, his girlfriend back when they started together in the company, who calculated his death date long ago and kept it in a blue envelope. If she still has the envelope, will it match his calculations? Is he, in fact, dead?

Along the way, many surprising memories come forward which at first seem unimportant, but if his death date is wrong, then is something wrong with Dare to Know?

I’m afraid that while I did enjoy the book, it went a little too far toward the bizarre for my taste. It did remind me of the author’s other book, The Order of Odd-fish, which also heads toward the outlandish and also doesn’t shy away from a main character who seems to be in danger of causing the end of the universe.

Read this book if you dare!

Find this review on Sonderbooks at: www.sonderbooks.com/Fiction/dare_to_know.html