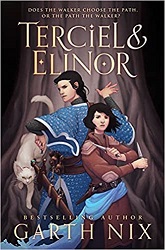 A prequel to Sabriel! I preordered myself a copy as soon as I found out about it. It’s been a very long time since I read Sabriel, but I still recognized the names of the foes threatening the Old Kingdom.

Terciel is a young man and the Abhorsen-in-Waiting. Elinor is a young woman who has grown up on the south side of the border with the Old Kingdom, isolated in a manor house with her mother, a governess and the governess’s uncle, an old groom. She has been told that the mark her great-aunt put on her forehead when she was young is a disfiguring scar – rather than a charter mark giving her access to the magic of the Charter.

Elinor’s mother gets mysteriously sick, and then the Abhorsen-in-Waiting comes abruptly to her house just in time to protect her from the Greater Dead monster that has inhabited her mother’s body.

After barely escaping that incident, with those she loves dead, Elinor goes to Wyverley College to try to learn magic and go to the Old Kingdom. But another incident with the dead has Elinor traveling north sooner than she expected – and she becomes an important part of working with Terciel and the Abhorsen to stop a great threat.

I think you can read these books in whatever order you like, though I already know about the Abhorsens and necromancers and free magic and charter magic – I don’t know if it would be confusing for someone first picking up the books. But this unusual world and its magic and the dead who walk still has the power to captivate me. In fact, I’m soon going to need to reread Sabriel now that I’ve been reminded of this amazing world.

Find this review on Sonderbooks at: www.sonderbooks.com/Teens/terciel_and_elinor.html