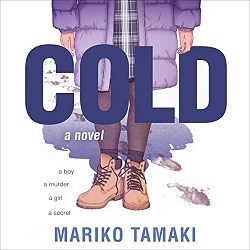 Cold is told in two voices, and one is the voice of Todd, a boy who just died. He’s hovering over his body, in a park naked and frozen in the snow, when his body is found by a dog. Detectives come and begin trying to figure out what happened to him and who killed him.

The other narrator is Georgia, a girl who didn’t even know Todd. But as she learns about him, she feels like they have some things in common. They’re both queer and don’t have many friends at their respective high schools. It turns out that Todd was a Senior at the boys’ school where Georgia’s big brother Mark is also a Senior. Mark tells her he didn’t know Todd, but something’s bothering her about that statement.

Meanwhile, while Georgia is thinking about Todd’s death and what might have happened, Todd’s ghost is following the investigation. The detectives are interested in the one teacher who was kind to him. Todd didn’t have a lot of friends, and maybe if he hadn’t wanted one so badly, things would have turned out differently.

This isn’t really a detective story, as the mystery isn’t solved so much as slowly revealed. When Georgia and the reader find out the answer, all the pieces fall together.

Todd’s ghost watching events takes some of the sting out of the story of a 17-year-old being murdered — but not entirely. I was left with a sense of sadness, as Georgia’s left thinking about what it all means.

Find this review on Sonderbooks at: www.sonderbooks.com/Teens/cold.html