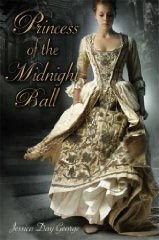 Princess of the Midnight Ball

I do love fairy tale retellings. Princess of the Midnight Ball is a retelling of “Twelve Dancing Princesses,” beautifully carried out.

This fairytale is one that features a hard-working common soldier, and I liked that aspect of the book. The book opens with Galen returning from the war. His father was a soldier before him, and his parents both died in the war. You can’t help but like Galen, and it’s nice to see someone deserving work hard to save the day and win a princess.

The reason the princesses dance every night is more sinister than meets the eye in the fairy tale. Their mother made an ill-advised bargain with the King Under Stone. And now her twelve daughters are paying the price, unable to tell anyone about their suffering.

And Galen is a knitter! He learned to knit his own socks and scarves during the war, and it comes in handy for binding evil. Two knitting patterns are included at the back of the book. I thoroughly enjoyed that bit of the story.

Jessica Day George also does a good job giving the princesses distinct characters — not easy to do when you’re dealing with a family of twelve! She gives Galen some additional obstacles to overcome with the result a thoroughly satisfying tale.

Find this review on Sonderbooks at: www.sonderbooks.com/Teens/midnight_ball.html