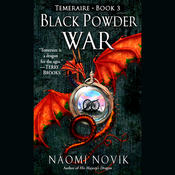 This is now the third book about Temeraire, the Celestial dragon serving in Britain’s Aerial Corps in this alternate history tale of the Napoleonic Wars.

Temeraire and his captain, Will Laurence, are ready at last to go back to England after a successful mission to China in the second book. Before they set out, they receive orders to go by way of Istanbul to pick up three dragon eggs for England.

To get there as quickly as possible, they must go by the overland route. Their voyage is difficult and dangerous and fraught with setbacks. Before they can get home, they wind up in the middle of Napoleon’s campaign to take over Europe and they in particular have gained a powerful enemy.

You definitely should read the earlier two books before you read this one, and I predict that you will be hooked, as I am. Temeraire is traveling the whole world in this series, since he took a different route back from China than the one he traveled to China in Throne of Jade. So now we see him outside the naval setting, navigating all kinds of challenges, and now zealous for a new cause: the promotion of dragons’ rights, from seeing how well they were treated in China.

I’m also hooked on Simon Vance’s vocal interpretation of the story, with Will Laurence’s proper British voice and Temeraire’s curious tone. I especially enjoyed the voice he gave the new hatchling in this book. I’m not even tempted to read the next book in print form — It is making my commute too much fun by listening. I’m also glad that I caught the series late — now I don’t have to wait before I can go on to Books 4 and 5.

Find this review on Sonderbooks at: www.sonderbooks.com/Fiction/black_powder_war.html