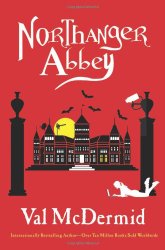 Another modern Jane Austen update! Very fun! Val McDermid takes the exact story of Jane Austen’s Northanger Abbey and writes it as Jane herself might have written it if she were alive today.

Now, with Sense and Sensibility, Joanna Trollope took an Austen novel I wasn’t terribly fond of and translated to modern times, which had it make a lot more sense. In this case, Northanger Abbey is one of my favorite Austens (or at least in the top half, after Pride and Prejudice and Persuasion), but in translating it, it actually seems a bit less believable to me.

The original Northanger Abbey made fun of gothic novels. Catherine Morland imagined Northanger Abbey as the setting for one, and fantasized a sinister mystery in the family’s history. In the modern version, Cat Morland imagines that vampire novels are real. To me, it was a much bigger stretch that Cat would believe in vampires than that she’d believe a gothic novel was real. I don’t care how much a girl likes to read paranormal romances. I don’t think anyone would start believing they are real, no matter how mysterious the family.

Other than that, it was again a good translation of all the situations to modern times. Though I have to face that I’m not crazy about the plot of Northanger Abbey other than the fun it has with gothic novels. The story of her supposed friendship with Isabelle Thorpe is a bit more painful. And while Val McDermid did give the final problem with the General a modern twist, she left in the foreshadowing of the problem from the original novel, which ended up falling rather flat.

Still, Austen fans will enjoy reading the update. It’s a bit amazing how neatly the situations fit in modern life. And bottom line, we’ve got a light-hearted romance and the story of a young adult going out in the world for the first time and making new friends – some better than others.

Find this review on Sonderbooks at: www.sonderbooks.com/Fiction/northanger_abbey.html