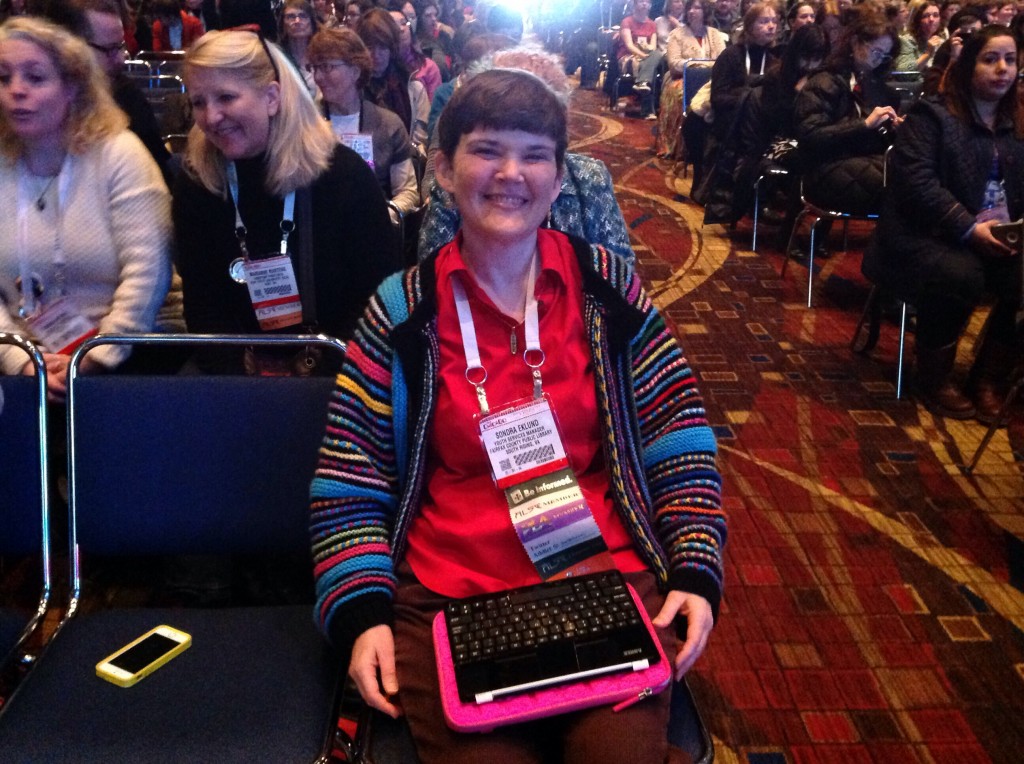 Hooray! I got a front row seat for the Youth Media Awards announcements that happened on Monday! 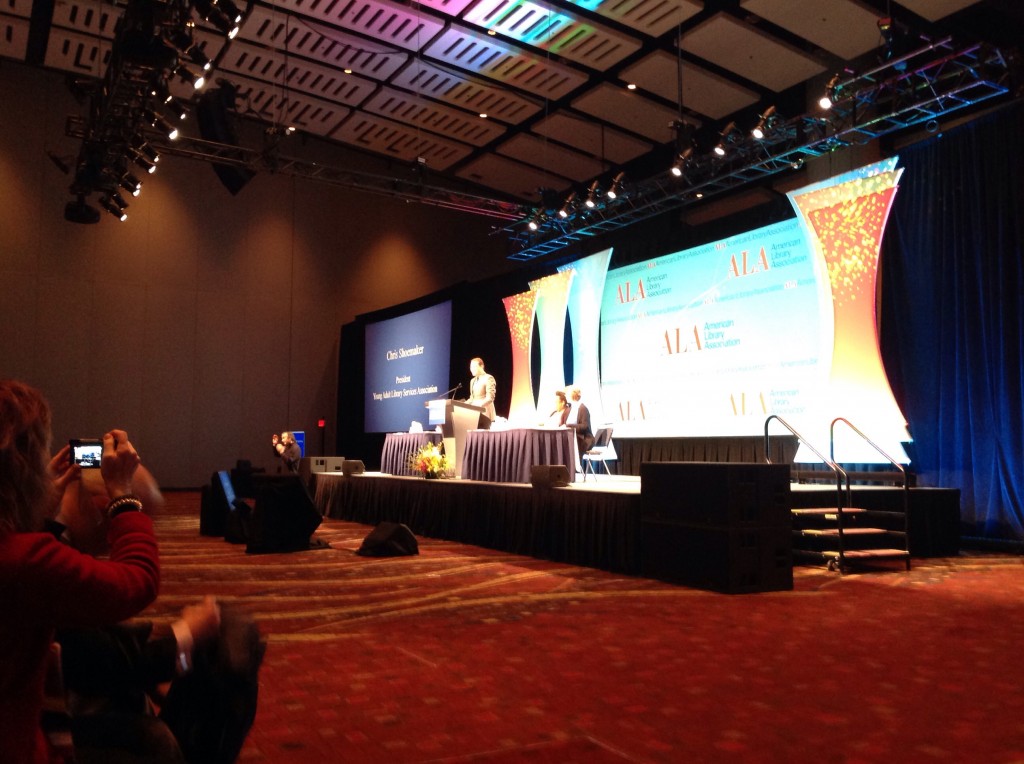 As you can see, I had a great view — though I spent most of my time tweeting the winners, rather than taking pictures.

The announcements of all the awards are on the ALA website, so I will just give some general impressions and link to the books I’ve reviewed.

The energy in the room can’t be described! These people who ignored the Super Bowl the night before (Well, I did.) and don’t even turn on the Oscars (Well, I don’t.) were energized and excited to find out who wins the Children’s book awards. We got up early and came through the snow and waited in line to be there, and speculation was high.

I’ll talk about the announcements in the order I remember them happening. It all starts with the Alex Awards — a list of ten adult books with strong appeal for teens. This list contains several I’ve been meaning to read, but none I actually have read.

One of the fun things about the announcements is that all the committees are there. Most committees bring some sort of prop to celebrate their top choice. Here is the Odyssey Award committee celebrating their choice of Horse, by Christopher Myers: 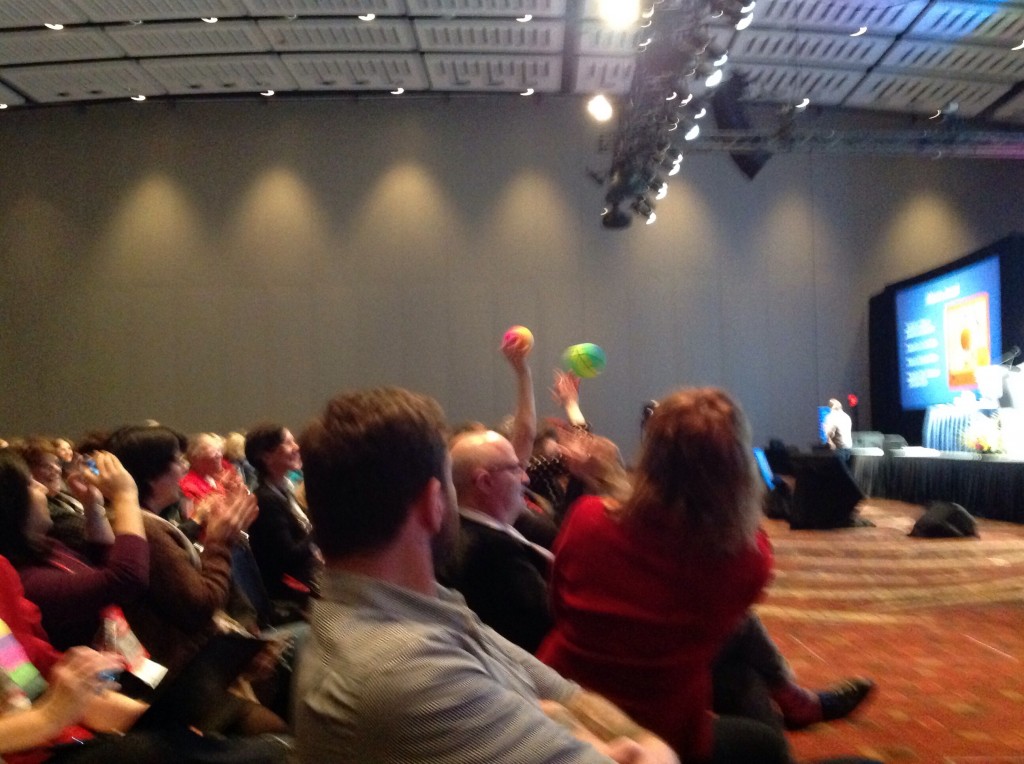 I didn’t notice if they did, but they could have thrown their props again when The Crossover won the Newbery Medal and a Coretta Scott King Honor.

It seemed like a lovely day for the #WeNeedDiverseBooks Campaign. The Wilder Award went to Donald Crews. The Edwards Award went to Sharon Draper. The Arbuthnot Lecture Award went to Pat Mora.

The Virginia Hamilton Award for Lifetime Achievement went to Deborah Taylor, a librarian whom I know from Capitol Choices, and a wonderful choice.

And Graphic Novels! El Deafo, by Cece Bell was a Newbery Honor Book, and, most surprisingly, This One Summer was both a Printz Honor Book and a Caldecott Honor Book.

I was especially happy about El Deafo after hearing Cece Bell speak in the Graphic Novel Author Forum on Friday night. It couldn’t happen to a nicer person! I have read El Deafo and have already written a review, which I’ll post soon.

A Caldecott Committee member whom I happen to know said, “The criteria is for ages up to 14. If they want to change the criteria…” Others have expressed indignation that a book for teens would win a Caldecott Honor, but the criteria indeed say nothing about “picture books” needing to be targeted to younger readers.

Before the awards, people I talked with felt that there would be great indignation if Brown Girl Dreaming did not win the Newbery, though one friend said that the writing in The Crossover is actually better. Yet when it came down to it, no one was indignant. I think that’s because Brown Girl Dreaming did win the Coretta Scott King Author Award, while Crossover won an Honor. In the Newbery, those positions were switched — but the fact that both were represented in both awards shows that those are just two darn good books.

And this completely puts to rest the idea that the Newbery committee might set aside books by African-Americans, thinking the Coretta Scott King Award will take care of them.

The one thing that made me sad was not seeing The Farmer and the Clown up there among the Caldecott Honors. I do love Marla Frazee’s work.

I hadn’t read as many of the contenders as usual this year, but many of those I had read were also my own personal favorites.

My review for The Crossover will be posted soon.

My favorite children’s nonfiction book of the year, A Boy and a Jaguar, by Alan Rabinowitz, illustrated by Cátia Chen, won the Schneider Award for younger readers.

Hidden: A Child’s Story of the Holocaust, by Loic Dauvillier, illustrated by Marc Lizano, color by Greg Salsedo, translated by Alexis Siegel, won a Batchelder Honor.

Finally, my much-loved Waiting Is Not Easy!, by Mo Willems, won a Geisel Honor.