I decided I should try coloring them myself, so I could post a thumbnail of each one. I had a lot of fun doing it, and was reminded of lots of cool properties I discovered from knitting my prime factorization sweater and looking at these charts.

I have a manuscript for a math-related children’s nonfiction book about using math to make codes with colors. Originally, I put several of these charts into the book — but I eventually decided it was a distraction and decided to put them on my website instead.

But they show all sorts of cool things! 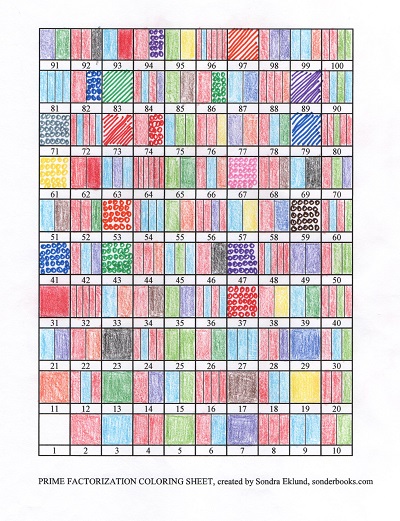 Coloring this chart gives you a great feeling for factorization and multiples. I posted about watching a second grader color it. I think of it as more for older kids, who are learning about primes and multiples, or indeed adults, in keeping with the adult coloring book craze. But watching a second grader color it assured me that it can give insights to anyone. (I made the instructions such that you don’t even have to know how to multiply. Just color every second square the color for 2, every third square the color for 3, and so on.)

Now, in my original sweater, I put rows of 8 on the back and rows of 2 and rows of 3 on the sleeves. The prime factorization charts in different bases are the same idea.

First, they give you a feeling for how different bases work.

Here’s the sheet for octal, base 8: 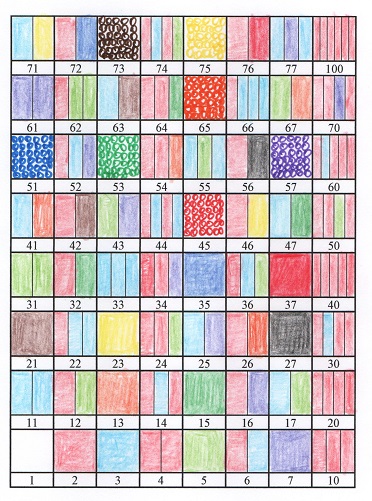 You can color it exactly the same way as you did the ten-by-ten chart. Color every second square with the color for 2, every third with the color for 3, and so on. If you take the time to do that, you’ll grasp how the numbers count up to 7 and then use the next digit, since place value in octal gives the ones digit, the eights digit, and the sixty-fours digit.

The chart also makes a good way to translate between octal and decimal. (Though you can just multiply the eights digit times eight and add the ones digit.)

But I enjoy some of the other patterns.

But it’s also fun what happens to the color for Base Plus One and Base Minus One.

And we’ve got the same patterns in a 7×7 Base Seven chart: 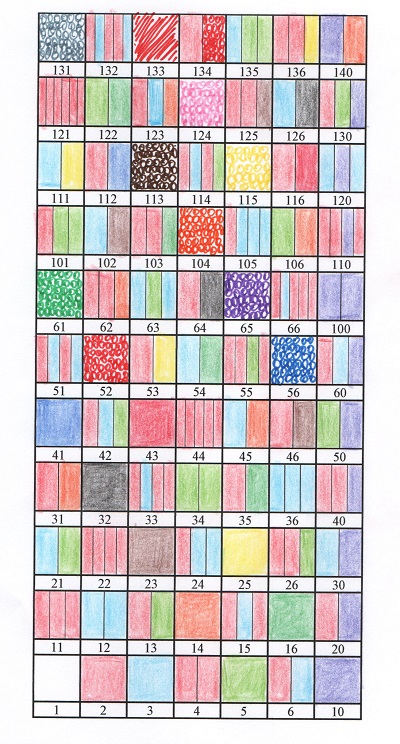 Notice that since 7 is prime, no colors line up except purple, the color for 7.

And the colors for 8 and 6 go diagonally up the chart.

The Hexadecimal chart in base 16 is even more interesting: 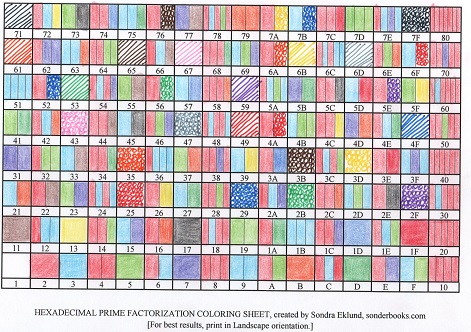 Before I finish I want to mention one more pattern I noticed from looking at these charts. It’s the familiar trick in Base 10 of the rule for figuring out if any number is a multiple of 9: Just add up the digits, and they will be a multiple of 9.

The reason this works is that 10 is congruent to 1 mod 9.
In base 10, each decimal place represents a number multiplied by a power of 10.
In base 9, that’s going to be the same as multiplying by 1 — so if you add up the digits, you get what the number is congruent to mod 9.

If none of that made any sense to you, just know this:
If you add up the digits of a base 10 number (and if you get a number bigger than 9, add them up again), your result is the remainder you’ll get if you divide the number by 9.

But you might have noticed when looking at the diagonal colors:

Forgive me, but I think these patterns are Awesome!

Let’s face it, you’ll see them much more clearly if you color the charts yourself!