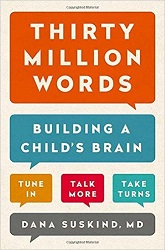 The number is based on a study done by Betty Hart and Todd Risley.

The data answered the paramount question: Was a child’s ultimate ability to learn related to the language heard in the first years of life? Three years of painstaking analysis left no doubt. It did. Counter to prevalent thought at the time, neither socioeconomic status, nor race, nor gender, nor birth order was the key component in a child’s ability to learn because, even within groups, whether professional or welfare, there was variation in language. The essential factor that determined the future learning trajectory of a child was the early language environment: how much and how a parent talked to a child. Children in homes in which there was a lot of parent talk, no matter the educational or economic status of that home, did better. It was as simple as that.

When they followed up with the children years later, the trend continued.

The essential wiring of the human brain, the foundation for all thinking and learning, occurs largely during our first three years of life. We now know, thanks to careful science, that optimum brain development is language dependent. The words we hear, how many we hear, and how they are said are determining factors in its development. The significance of this cannot be overemphasized since this window of time, if neglected, may be lost forever. When Hart and Risley looked at their data, the influence of early language on a child was unmistakable, the negative impact of a poor early language environment critical, including the effect on vocabulary acquision. Even more significant was evidence of the effect on IQ at three years of age.

Also important was what was said.

But quantity of words was only one part of the equation. While the number of words a child heard was important, imperatives and prohibitions appeared to stifle a child’s ability to acquire language.

“We saw the powerful dampening effects on development when [a child’s interaction with a parent] began with a parent-initiated imperative: ‘Don’t’ ‘Stop’ ‘Quit that.'”

Two other factors seemed to have an effect on language acquisition and IQ. The first was the variety of vocabulary the child heard. The less varied the vocabulary, the lower the child’s achievement at age three. The other influence was family conversational habits. Hart and Risley found that parents who talked less produced children who also spoke less.

This book is ultimately a book of hope, about teaching parents how important their words are.

The incredible power that helps nurture the brain into optimum intelligence and stability is parent talk. If the most profound mysteries of the brain are still to be discovered, that truth has already been revealed. And it shows you how smart the brain really is, because, in absolute evolutionary brilliance, it harnesses a plentiful, natural resource as the key catalyst for its own development. The process is so simple and hidden that you aren’t even aware it’s happening. You can’t sell it, you can’t store it, you can’t list it on the New York Stock Exchange, but a caregiver’s language is the essential resource of every country, every culture, every person, extending into every crevice of who we are, what we can do, and how we behave.

The book goes on to talk about how parent talk helps in every area of brain development.

But then it talks about how to turn this research into action. In the Thirty Million Words Initiative, parents are being taught effective ways to talk with their little ones.

I like the memorable Three Ts that parents are taught: Tune In, Talk More, Take Turns.

A little bit more about each one:

Of the Three Ts, Tune In is the most nuanced. It involves a parent’s making a conscious effort to notice what a baby or child is focused on, then, when it’s appropriate, talking with the child about it. In other words, focusing as the child is focused. Even if the child is too young to understand the words being spoken, even if the focus is constantly changing, Tuning In refers to a parent’s following and responding to a child’s lead. It represents the first step in harnessing the power of parent talk to build a child’s brain. If a parent is not Tuned In, the other Ts will not work.

Talk More, which goes hand in hand with Tune In, refers to a parent’s increased talking with a child, especially about what the child is focusing on, not to him or her. While this may seem a subtle distinction, it is fundamental to the TMW approach. Talking More with a child requires a mutual level of engagement between the child and the parent. Like Tune In, it is another critical element of parent-child attachment and brain development.

And the final T puts it all together.

The final T, Take Turns, entails engaging a child in a conversational exchange. The gold standard of parent-child interaction, it is the most valuable of the Three Ts when it comes to developing a child’s brain. In order for the necessary serve-and-return of conversational interaction to be successful, there has to be active engagement between the parent and child. How does the parent achieve this? By Tuning In to what the child is focused on and Talking More about it. The key, whether a parent has initiated interaction or is responding to a child’s initiative, is for the parent to wait for the child to respond. That is what sets the stage for the critical Taking Turns.

The book goes on to talk about practicalities, and how this applies in many different ways and many different subject areas. But I like how nicely the content is summed up in the title alone.

As a children’s librarian, reading this book urges me to communicate these important principles to parents and helps me realize how important parent talk is, even from birth. I recommend this book for all parents, but also for anyone who works with babies or parents of babies. A powerful, hopeful message.

Find this review on Sonderbooks at: www.sonderbooks.com/Nonfiction/30_million_words.html