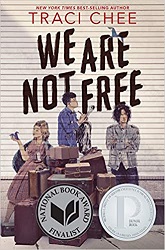 We Are Not Free

We Are Not Free is a novel about Japanese Americans forcibly removed from their homes and incarcerated during World War II. An interesting and effective choice made for this novel is to present the story from multiple perspectives. Every chapter has a different perspective.

We start with a 14-year-old kid in a community of Japanese Americans living in “Japantown” in San Francisco. We hear about the older teens he looks up to who will end up being viewpoint characters as the book goes on.

The book starts three months after Pearl Harbor when people of Japanese descent are getting targeted by racists. It continues as they have to sell off their possessions, because they’re only allowed a little bit of luggage in the slightly-refurbished racetrack where they’re taken next. It goes on through the war as the people in the camps have to decide if they will declare their loyalty to a government that removed their rights and volunteer to fight in the war.

By using so many perspectives, we get a broad view of what happened to different groups of people, including those who went on to fight in the war and those who refused. We learn about various levels of inhumane treatment, from the horrific conditions for those who were deemed a threat to the smaller indignities such as happened to those set loose with $25 and having to find a new place to live.

The teens have widely different attitudes. Many are angry. Some just want to make the best of things and move on with their lives. All of them encounter grave injustices, and seeing the situation from so many different eyes helps the reader understand the whole thing better.

And, yes, there are a lot of painful things that happen. This isn’t a feel-good book, but it is a book that shows you many sides of a terrible historical injustice perpetrated by our own government. I wish this book weren’t as timely as it is.

Find this review on Sonderbooks at: www.sonderbooks.com/Teens/we_are_not_free.html