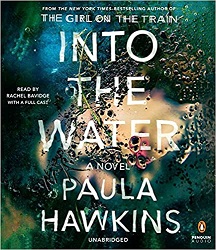 by Paula Hawkins
read by Rachel Bavidge with a Full Cast

I decided I’d been reading too many children’s books and I was ready for a thriller, so I checked out this book by Paula Hawkins, who wrote the incredibly suspenseful The Girl on the Train. This one does have suspense, with danger and mysterious deaths.

The setting is an important part of the book. It all happens in Beckford, at the Drowning Pool part of the river that runs through town. Years ago, they used to use the pool to put accused witches through their ordeal and end up drowning them. In more recent years, it’s been the site of multiple suicides.

Nell Abbot has always been obsessed by the Drowning Pool and those who died there. She used to terrorize her little sister Jules with stories of the little boy who saw his mother jump to her death. She was working on a book about the “troublesome women” who died there. But now Nell Abbot is dead, having jumped off a cliff into the river. Or did she jump?

Her fifteen-year-old daughter Lena is convinced she did, and is devastated because of the argument they had shortly before. Jules has been called back to Beckford to care for Lena, and Jules has her own guilt because she’d refused to talk to her sister for years, and had been convinced the urgency in her voice on the phone recently was just a bid for attention.

All of Jules’ narrated sections are in the style of her talking to Nell. She thinks she hears Nell’s voice, and she sees Nell in everything, in all the memories of being in the same house where they grew up, and looking at Lena, who looks so much like Nell when they were young.

But it turns out that the little boy of of Nell’s old story is Sean Townsend, the detective in charge of her case. He didn’t actually see his mother jump into the river so many years ago, but he was at the river, and his mother’s death in the same way brings extra emotion to the case. And there was another death in the river only a few months before Nell, when Lena’s best friend Katie jumped to her death. Katie’s mother can’t forgive Lena for still being alive, and she couldn’t forgive Nell for being so obsessed with women drowning in the river that she surely gave Katie the idea.

But that’s just the beginning of this complicated story. We’ll find out more about all those recent deaths – from Sean’s mother to Katie to Nell. And to do it will take many perspectives. I wish I had paid attention and realized when I started listening that it was a full cast production. At first, I quickly lost track of who was who in the many voices I heard. It helped when I realized my eaudiobook showed the name of the current narrator on my phone screen, and I think if I’d read the book in print, that would have been easier to follow. There were so many characters, the different voices didn’t help me keep track of who was who.

It’s a sordid story. It seems like almost everyone in it was having sex with someone they really shouldn’t have had sex with. And I’m not talking merely adultery. There’s an awful lot of death, too – though we know that right from the start. Let me just say that not all the deaths in this book turn out to be suicide, which is also not a surprise. Who is responsible for different deaths is more of a surprise.

The characters also aren’t tremendously likable. Though by the end, I was especially rooting for Jules and Lena to make a family relationship with each other and find peace.

So it’s not exactly a pleasant story – but it’s certainly suspenseful and engaging. I stayed up an extra hour to finish it when I got to the end because I didn’t want to put off finding out what happened. Paula Hawkins does know how to weave a suspenseful story and feed us bits of what happened in a way that realization gradually dawns on us how much is at stake.

Find this review on Sonderbooks at: www.sonderbooks.com/Fiction/into_the_water.html