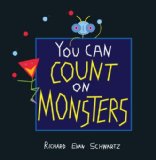 You Can Count on Monsters

The First 100 Numbers and Their Characters

When I first heard of this book, I was delighted, and rushed to order my own copy. I was even more delighted when I read the book. I requested that the library system order it as well. This book would have been absolutely perfect when my sons were young and exploring numbers. I hope I get a chance to share it with a child.

I love it so much because of my experience making my prime factorization sweater. I chose a color for each prime number, then made a chart of all the natural numbers up to 100, showing their prime factorization with colors. I loved all the patterns that resulted.

Richard Evan Schwartz uses a similar idea, but adds a lot of creativity: For each prime number, he creates a monster! Then composite numbers are shown with the monsters from their prime factorization interacting together. It’s a lot of fun to look through the pictures and see the way he’s worked in the monsters. He’s also got an arrangement of dots on each page that demonstrates more about the number and the way it’s composed.

He says he created the monsters to explain prime numbers and factoring to his daughter, and I would love to share this book with a child. You can look at it again and again.

There’s a lovely simple explanation of multiplication and factoring at the front of the book. Then he explains the method behind the monsters:

“Each monster has something about it that relates to its number, but sometimes you have to look hard (and count) to find it.”

“For the composite numbers, we factor the number into primes and then draw a scene that involves the monsters that match those primes.

“It isn’t always easy to recognize the monsters in a scene. For instance, here is the scene for the number 56. You should see three 2-monsters buzzing around one 7-monster. Recognizing the monsters in the different scenes is part of the fun of the book!”

This book would also be great support for a child learning the multiplication tables. If you visualize monsters, they’ll be much easier to remember!

Most of all, I love the way this book showcases the playful, creative, and beautiful side of mathematics. You can count on Monsters to show you just how much fun math can be!

Find this review on Sonderbooks at: www.sonderbooks.com/Childrens_Nonfiction/you_can_count_on_monsters.html

Source: This review is based on my own copy of the book.