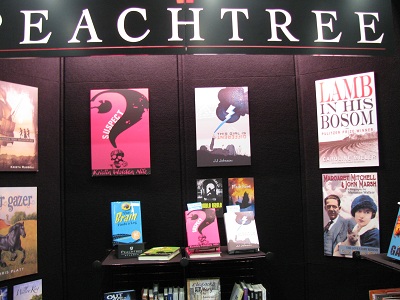 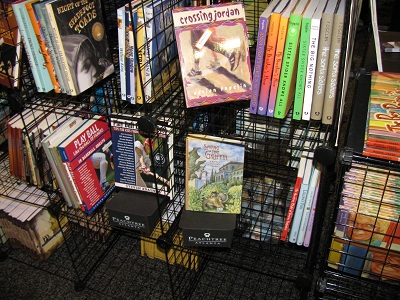 I’m so excited! My flight leaves for ALA Annual Conference in New Orleans at 6:00 am on Friday morning! (I so hope I will wake up! But I think I will be too excited to sleep well.)

The first thing to do when preparing for ALA Annual Conference is figure out what programs and events you’re going to attend. This time I signed up for several things that cost extra, before I’d even seen the schedule, hoping that would make it easier to choose. It didn’t.

Imagine it this way: There are a series of programs about libraries and authors and serving various customer groups and so many other things. There are at least five or so very interesting choices at each time slot. Then there’s the whole author signing schedule, which doesn’t correspond to the program schedule in any way. Then add into that Publisher Previews where editors talk about the books coming out in the Fall that they’re most excited about. It’s really hard to pick what you want to go see. I did learn from previous conferences when I wedged into a room without enough space for everyone that you definitely need to have an alternate plan. (That’s not hard to do. The hard part is realizing that you really won’t get to very many of your alternates.)

I also needed to make my schedule before I figured out what to pack. It will be HOT in New Orleans, and I definitely want to dress up for the Newbery/Caldecott/Wilder Banquet and the Printz Award Reception, so I’ll have to build in enough time to go back to my hotel. Maybe maybe rest while I’m at it? And should I bring my laptop? I won’t have much time at all to use it, but right now I’m leaning toward bringing it, if only for the time sitting in airports.

Of course, if any of these have long lines, which they well may, I may not get to the others. Though that might be a good thing, as it looks like I am going to be weighed down…

For programs, the ones I splurged for a ticket are:

The Newbery/Caldecott/Wilder Banquet. Attending this was a highlight of my year last year. I wouldn’t miss it.

The Printz Award Reception. Where ALL the brilliant authors honored give speeches.

The YA Author Coffee Klatch. Where you get to meet lots more authors, all award winners.

The Margaret Edwards Luncheon. Alas! Terry Pratchett isn’t healthy enough to come in person, but he’s going to send a video acceptance speech. And that’s one day when I’ll take the time to eat a good lunch.

This year I also decided to buy a ticket to the Gala Author Tea, honoring some writers for adults (to broaden my horizons), and a Walking Tour of the French Quarter, since I know nothing about New Orleans and it seems a shame to be there but only stay in the hotel and the convention center.

This doesn’t leave a lot of time for other conference programs! But some I’m hoping to attend are:

A panel with Nancy Pearl talking about Reader’s Advisory Research and Trends. (What? That doesn’t sound super exciting to you?)

The movie “Library of the Early Mind,” a documentary film exploring children’s literature. (Again, I’m really looking forward to this!) Here’s the trailer:

I’m thankful for the tip from Travis Jonker at 100scopenotes to attend the Notable Books Committee meeting, where they talk about the best books of the year.

And to Abby the Librarian for the tip to attend the Best Fiction for Young Adults meeting where they have actual teens (gasp!) come in and give feedback on the books.

I’m not sure whose blog tipped me off to go to the Odyssey Awards, but when I saw that slot was free and read the outstanding audiobooks that are being honored, I got excited about that event.

Because the SCBWI KidLit Drink Night last year got me off to a fantastic start at meeting people, I’m planning to attend the ALSC Happy Hour Friday night, and hope it will be as good. Oh, another reason I have to attend is that Google Maps reports that the walking distance from it to my hotel is 22 seconds! Not one minute, not half a minute, but 22 seconds! How can I resist going and timing myself? Besides, it will be easy to get to my room if I conk out early.

And, definitely, attending ALA is about making connections. I really love meeting authors and telling them how much I love their books. (And I hope to be one of them some day — I’m still seeking an agent for my middle grade fantasy novel.) I also love meeting other librarians who are excited about librarianship, and especially touching kids’ lives with books. I recently volunteered to be on an ALSC Committee and was appointed to the Children and Technology Committee. My term doesn’t start until after ALA Annual, but I hope to meet other committee members. And I was delighted when I learned that bloggers extraordinaire Travis Jonker of 100scopenotes and John Schumacher of MrSchuReads are on the very same panel! This will be my first committee experience, and I’m looking forward to it. I’m a relatively new librarian, and I don’t want to lose my enthusiasm, which gets endangered when I stay local and think about things like RIFs and budget cuts.

So, I can’t think of a better way to build my enthusiasm for being a Librarian! On to New Orleans!