I discovered Jasper Fforde in 2004, thanks to the recommendation of my friend Shannon. The first two books in the Thursday Next series were both 2004 Sonderbooks Stand-outs in Science Fiction and Fantasy, The Eyre Affair at #2, and Lost in a Good Book at #5.

I kept reading, and the next two Thursday Next books were 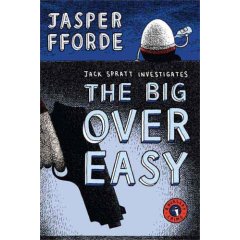 And then he started writing the Nursery Crime series. The Big Over Easy, solving the mystery of who pushed Humpty Dumpty, was also a 2005 Sonderbooks Stand-out, #7 in Mystery.

His next Nursery Crime book, The Fourth Bear was a 2006 Sonderbooks Stand-out, #5 in Mystery Fiction. Have I used the words “quirky” or “bizarre” yet in talking about Jasper Fforde? In this one, it appears there are not merely three bears.

It was back to the Thursday Next series in 2007, in fact with the book Thursday Next a 2007 Sonderbooks Stand-out. But that was the year I didn’t get all the Stand-outs reviewed, since I was dealing with little things like finding a job after my marriage fell apart and moving to the other side of the world and getting my Master’s in Library Science. But, yes, it was another wonderful addition to the series and was #5 in Fantasy Fiction.

In 2010, Jasper Fforde started another quirky and bizarre new series,

which was a 2010 Sonderbooks Stand-out. The whole society is based on what colors people can see. (How does he come up with these ideas, anyway?) Shades of Grey: The Road to High Saffron was #7 in Fiction for adults.

And finally in 2012, he wrote a fantasy novel for teens, The Last Dragonslayer, which was a 2012 Sonderbooks Stand-out, #10 in Teen Fiction.

There you have it, 9 Sonderbooks Stand-outs, and I’ve only been reading his books since 2004. I highly recommend his books for any time you’re in the mood for clever, quirky, and bizarre. More bizarre than pretty much any other author you’d ever care to read. In a good way.