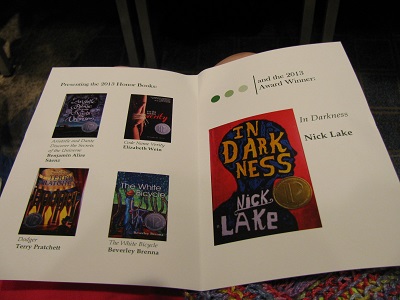 Every year I go to ALA Annual Conference, I can think of no better way to finish it off than attending the Printz Awards Reception. Unlike the Newbery-Caldecott Banquet, all the honorees give a speech. They’re good authors, so you’re in for some eloquent speeches. The Printz Award is open to any English-language book, so you usually get to listen to some wonderful accents!

Before I cover the Printz Reception, here’s a wrap-up of all my ALA 2013 posts:

One thing I enjoy about the Printz Reception: I get to see my YALSA friends, who weren’t necessarily at the earlier ALSC events I attended. (YALSA is for service to young adults, and ALSC for service to children. As a public librarian in Fairfax County, we have them grouped together in “Youth Services.”) I got to sit next to Liz Burns and got to talk to others at the reception.

It was quite unfair that Benjamin Alire Saenz, author of Aristotle and Dante Discover the Secrets of the Universe went first, since he had much of the audience in tears with his heartfelt speech.

I haven’t (yet) read Aristotle and Dante Discover the Secrets of the Universe, but I gather it’s about a boy discovering friendship and romance with another boy.

Benjamin Alire Saenz said that this book was written out of his own journey, which was conflicted and difficult.
He “came out” at 54.
“What are a few wounds to a writer?”
His character, Ari, is on the brink of manhood, but also on the brink of self-hatred.
His characters’ fears and apprehensions too closely mirrored his own.
“There should be road maps out there for boys who were born to play by different rules.”

To those who say homosexuality is a choice, he asks:
“What madman would make such a choice in a world such as this?”

“It is no accident that many gay men have to struggle to love another man — and themselves.”

“Men and boys like me are neither demons, nor are we deviants. We are just men.”

He went on to thank the committee for choosing to honor this book. It was published on the day his mother died. So he wasn’t able to celebrate the book’s publication. Honoring Aristotle and Dante Discover the Secrets of the Universe gave him back his book and gave him a chance to celebrate it.

“Julie is born to be a novelist, but this is her only chance.”
“Julie also writes because there is power in it. Words are her weapon of choice.”
“Inventing the code sequences is what keeps Julie going.”
“In times of stress, or fear, or boredom, we invent stories.”
“Julie writes in the present tense. She is eternally writing.”

This book makes people cry, but it also makes them laugh.
“The paradox of the power of words: They can be wielded, like all dangerous tools, for good or for evil.”

Terry Pratchett, Honor for Dodger, via his editor, Anne Hoppe:

The book was undertaken as a tribute to Henry Mayhew, who wrote London and the London Poor.
The poor had freedom — to starve.
“Authors tend to have pack rat minds, and my mind has more rats than Hamelin.”
“Everything in the book is real except the plot.”
“You don’t have to make much up if you read a lot of social history.”

These conferences are a great opportunity to share stories.
Stories can change people.
Diversity can create walls or take down walls.
People with disabilities don’t often travel in YA novels.
Librarians make connections between people and reading.
“Librarians are partners with authors in a deliberate quest to achieve social justice.”

Nick Lake, Printz Award for In Darkness:
(Just when I thought we weren’t getting cute accents this year, Nick Lake had a marvelous one.)

His theme involves Circles, which protect against the evil eye.
“The ordinary world really is magical and wonderful.”
“Infinity is not necessarily big.”
“Toussaint and Shorty are inside each other.”
“From the perspective of genes: Nothing is ever lost.”
“Even in darkness, there’s the possibility of light.”
To him, it’s about goodness.
“Loss isn’t real and can be overcome.”
The magical power of the book is about the possibility of wonder in the everyday.

“Almost all YA novels are about a spirit journey.”
The characters enter a liminal world and an adventure that changes them, followed by a return.
It’s Campbell’s Hero’s Journey.
The concept of the eternal return – time when direct communication with God was possible – We long for that time.
We re-enact the eternal return by rituals and rites of passage.
Rites of passage are about moving into the adult world.
Which is not easy.

“We live in a world where boundaries between the young and adult are constantly eroded.”
“Reading fiction is an example of the eternal return.” – Vicarious initiation rituals.
“Books help young adults navigate the path to the adult world. They help them to grow up well.”

And so, deeply inspired, we moved on to dessert — cupcakes and popcorn.

I schmoozed a little bit, talked to friends, and got one more picture with Elizabeth Wein: 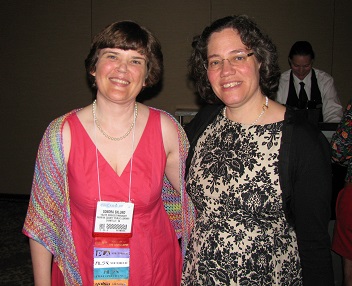 It was a nice end to a fabulous conference!