I’ve already posted about the first day of KidLitCon 2015 in Baltimore.

Since Baltimore is driving distance, I chose to drive rather than stay at the hotel, but my goodness it was quicker on Saturday (both directions) than it was on Friday! 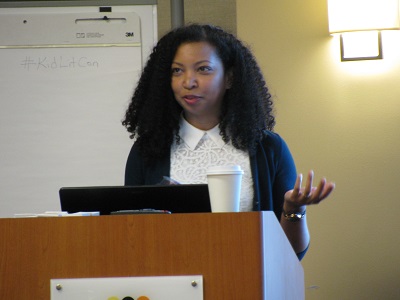 Saturday began with a keynote speech from Tracey Baptiste, author of The Jumbies.

She took from the mythical characters — the Jumbies — that she’d grown up with in Trinidad.

She does believe that the majority of stories about a culture should be told from deep inside the culture. The more personal a story is, the more universal they seem to be.

Stories that come out of great need are stories we all need. 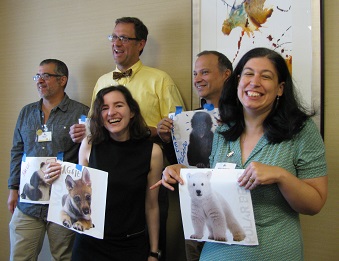 Moderator Miriam DesHarnais, fitting to the theme, had made pictures and word cards and arrows to use for the panel. She’s on the right in this picture. The other woman is Maggie Thrash, author of Honor Girl. The tall guy in back is Jay Hosler, author of Last of the Sandwalkers, and the other two men are Jorge Aguirre (on the left) and Rafael Rosado, authors of Giants Beware! and Dragons Beware!.

The panel was entertaining, including game-show-style questions. I’ll list a few gems.

Maggie said: Teens are brave. They like reading about people different from themselves.

Jay (a college biology professor) said: In kids, the desire to participate is huge. This is lost by the time they’re college students who don’t want to stand out. They don’t want to question authority.

Each author has someone in their books who says, “You can’t do things this way.” And the main character challenges that.

Maggie: Girls are told it’s not nice to excel.

Jay: It’s a glorious time to be a cartoonist. Put your stuff on the internet. Don’t wait. You’ll never be good enough in your head.

Galileo made the first comic: Stars next to the moon. Something happens when words and pictures are put together. More learning happens. It contextually motivates learning.

Rafael: Connections are made in between the panels.

Jorge: Between the panels, action happens in your head — so there’s more interaction between the book and the reader.

Maggie: Comics are so intimate. They bring you there. To see a body slump adds more empathy than to read about it. Also, you can linger more than over a movie.

And Jay says his next book involves this question: What do you do when your best friend turns out to be a parasite coming out of someone else’s head?

The next panel I attended was called “Intersectionality: The Next Step in Diverse Books”

The panel was to have included Zetta Elliott, but she wasn’t able to come, and her opening talk was read by Mary Fan. The other panelists were Mary Fan and twins Guinevere and Libertad Tomas. 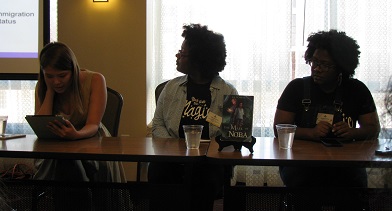 Zetta Elliott pointed out that each person is at the intersection of multiple aspects of our identities.

When you’re reviewing a book, publicly locate yourself and notice your own positionality.

Guinevere Tomas: She used to wonder why marginalized characters had to die off. The sisters are black, but also Cuban. Why did one or the other identity have to be sacrificed? Then there are religious, gender, sexuality identities. She doesn’t want to leave part of her identity behind.

Libertad was looking at random YA Queer book lists — all are about cis white people.
Muslim lists — don’t reflect black and Latino.
Disabled lists — all white.
Latino lists — all have the same brown skin color.
When you’re at the intersection of many of these, you have to walk around with someone defining your identity for you.
She was so happy when she read a book with a main character who was like her.

Mary Fan: None of us fit into boxes. At the end of the day, we’re all “Us,” and the only “them” is ignorance.

How to keep up? Keep reading.

You have to be uncomfortable to change it.

When white people review books, they often don’t mention people of color or queer people. Libertad does want to know when marginalized people are represented. Tell if the books have diversity and if the diversity is on point.

Mary Fan gave a cynical definition of dystopia: “What if all the horrible things in the world also happened to white people?”

The next panel I attended, “Authentic Voices,” had a similar theme. It was led by Liz Burns and Pam Margolis.

In particular, they talked about books for the blind. Like anyone else, they’d like to see themselves in the books. Everyone would like to be the main character some time.

Pam looks at the author and asks questions like:
Why are they writing about this? Does it seem authentic? What’s their motive?

Do you know how to tell the publishers what you want? Buy books that have diversity.

The next panel I attended was “Middle Grade Madness.” 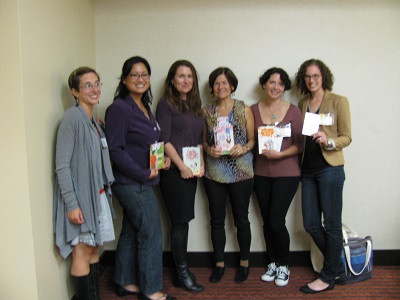 On the left in this picture is moderator Sam Musher, then Wendy Shang, Elisabeth Dahl, Carol Weston, Erica Perl, and Elissa Brent Weissman.

They were talking about writing for middle grade readers. They all appreciate the humor you need to put into the books, but also the importance of dealing with the characters’ emotions.

In middle grade: Who you’ll sit with in the cafeteria is more important than whom you’ll grow up and marry.

Erica: These kids have one foot in childhood and one foot out the door. They’re not in between; they’re both!

Carol: These kids go through things in such a big way. And a young reader who loves your books is totally in love and will read them over and over.

All agreed that there’s a playfulness to middle grade writing that is refreshing.

And the final panel of the day was “Connecting with Debut Authors,” led by Kathy MacMillan and Alyssa Susannah. Here’s Kathy: 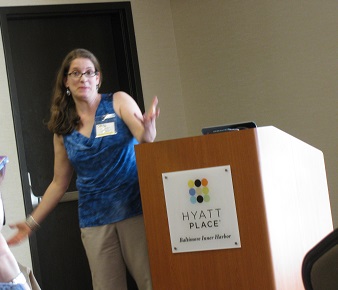 Kathy has a debut novel coming out in January 2016, and talked about debut groups and how bloggers can find them.

Debut authors are “tender little souls, like soft shell crabs.” And the publishing process is long and slow and crazy-making. So please don’t tag a new author with your review unless you liked their book!

But debut authors will be especially appreciative of reviews — and that’s the best way you can support them.

That’s my wrap-up of KidLitCon 2015 in Baltimore. Of course, the panels and talks are only a small part of the experience. What’s beautiful about KidLitCon is the small setting, getting to meet authors, and especially the other bloggers whose work you’ve read and who have served on the Cybils and made their voices heard in various ways.

Most of all, Children’s Book Bloggers are *my people*! It was a huge treat to be among them again.