It’s time for Sonderling Sunday! Where I play with language by looking at the German translations of children’s books.

Only tonight, I’m going to go with the opposite approach, looking at the English translation of a German children’s book. 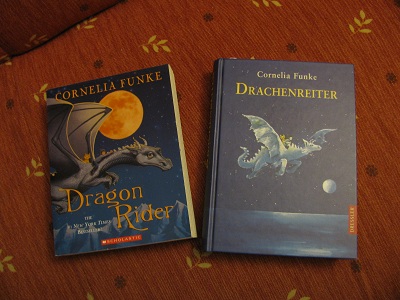 Cornelia Funke is popular in many countries, and tonight I’ll look at her book Drachenreiter, which is a pretty simple translation into English as Dragon Rider. Now, I discovered when I looked at the lengths of the books I own in English and German, this is the only one where the German edition is shorter (448 pages) than the English edition (536 pages). In Momo, the difference wasn’t as extreme as in others, particularly The Order of Odd-Fish. My theory is that it’s easier to be less wordy when you’re actually writing and thinking in German than you have to be when you’re trying to explain rather bizarre English concepts in German.

I need to keep it short tonight, because today I spent 7 hours on the road, taking my son back to college, came home and took a nap, and now am trying to do a little bit before I go back to sleep to get me good and sleepy. So let’s dip into Drachenreiter

Oo! The first thing I learn on the title page is that the German edition is Mit Illustrationen der Autorin, “with illustrations by the author.” The English edition gives no such credit, except on the copyright page for the “inside illustrations,” and doesn’t seem to include all of them. The English edition lists two other Cornelia Funke books published by Scholastic. The German edition lists 23, so there are surely many translations to go.

Chapter 1 is SCHLECHTE NACHRICHTEN, which is translated straightforwardly as “Bad News.”

I’ll continue my method of listing phrases that catch my eye. Since the original is German, I’ll list that first.

This sentence doesn’t quite say the same thing, it seems to me:
“It was so dark under the fir trees that you could scarcely see the gaping crevice in the mountainside that swallowed up the mist.”
That’s translated from:
Unter den Tannen war es dunkel, so dunkel, dass man den Spalt kaum sah, der in der Bergflanke klaffte. Wie ein Schlund schluckte er den Nebel.
(More literally translated: Under the fir trees was it dark, so dark, that you could scarcely see the gap, that in the side of the mountain gaped. Like a gullet it gulped the mist.” Okay, overall it means the same thing, but I like Wie ein Schlund schluckte, and there’s no direct translation of that.)

This rant by a rat is more fun to say in German:
“They know absolutely nothing about the world. Not the least little thing.”
Sie wissen gar nichts von der Welt. Nichts, überhaupt nichts.

Longer in English:
mit geflecktem Fell = “with a spotted sulfur-yellow coat” (The sulfur-yellow part must be found somewhere else?)

“furry faces” = Pelzgesichter (There! Aren’t you glad to know that word?)

The translator got more creative with this exclamation:
Pfui, Schimmelpilz = “Oh, festering fungus!” (It’s a good translation. More direct is something like “Phooey, mold!”)

Another handy expression:
“in a rather hoarse voice” = Seine stimme war ein bisschen rau. (“His voice was a bit raw.”)

Another insult (The rat and the brownie don’t like each other.):
pelzigen Dummheiten = “fur-brained fancies”

The translator likes alliteration almost as much as I do:
Bleichstieliger Schüpperling! = “Oh, putrid puffballs!” (I’ve got to go with the translator on this one.)

Here’s a choice word:
Drumherumgerede Google translates it “Trappings talk” or “all around talk.” The translator embedded it in a sentence, “The way that rat carries on is enough to drive anyone crazy.”

Why are the insults the most fun?
du blätterwühlender, pilzfressender, zottelköpfiger Kobold = “you leaf-burrowing, mushroom-munching, shaggy-haired brownie” (zottelköpfiger literally means “rat’s-tail-headed.” Seems like an odd insult from a rat, but otherwise a handy thing to know.)

And with that, fully tired now, I need to get to bed. What about you? Know any good insults in another language? How would you translate zottelköpfiger Kobold into Spanish? Korean? Anyone?